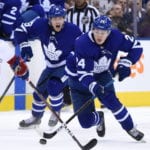 Do the Maple Leafs use their depth at forward to improve their blue line? What are other areas of need and what are their options?

Jonas Seigel of The Athletic: If the Toronto Maple Leafs miss the playoffs, GM Kyle Dubas could be on the hot seat.

If the Maple Leafs don’t think they can go four playoff rounds with Jake Muzzin, Morgan Rielly, Tyson Barrie, Justin Holl, Travis Dermott and Rasmus Sandin (or Cody Ceci), then they may need to add at the deadline.

They don’t have a 2020 first-round pick. Ilya Mikheyev will need a raise next season. Can they afford Kasperi Kapanen for two more years at $3.2 million?

If Alex Kerfoot is a better fit on the wing, do they need an upgrade at the third-line center position? Kerfoot has three years left at $3.5 million. Do they trade Kerfoot for help on the blue line?

The Leafs could also look at add a backup goaltender.

Jason Greger: TSNs Craig Button: “The depth players in Toronto are over-hyped. Suggesting Bracco will get you a solid Dman. Sure, he’d get you a good AHL D-man. Their forwards, outside of the top four, won’t fetch the return people are suggesting.”

So far the Rangers are asking for a high price – a quality young NHL ready player – and not a draft pick or prospect.

The Maple Leafs and others find that price too high for the 23-year old goaltender who has only 60 NHL games under his belt.

It is believed that the Maple Leafs may be willing to offer up Jeremy Bracco, but with the Rangers looking for more established players, that would likely mean Kasperi Kapanen, Andreas Johnsson or Alexander Kerfoot. That likely doesn’t work for the Leafs.

Luke Fox of Sportsnet: The Maple Leafs will likely be buyers at the deadline but may need to get creative due to their salary cap situation. Looking at three potential trade targets for the Maple Leafs.

Alexandar Georgiev – New York Rangers – Pending RFA with a $792,500 salary cap hit. The Rangers are looking for young, skilled forwards. If the Leafs can’t work out a deal with the Rangers they should look at goaltenders Casey DeSmith, Ryan Miller, or Aaron Dell.

Brenden Dillon – San Jose Sharks – The left-handed defenseman should be the Leafs top blue line target. The 29-year old brings a defensive, physical presence and has playoff experience. The Leafs have plenty of winger prospects that might interest the Sharks.

Travis Hamonic – Calgary Flames – The Leafs have had an interest in the right-handed defenseman since he was with the Islanders and were close to acquiring him this past offseason but Nazem Kadri nixed the deal. The Flames are looking for a top-six winger. The Leafs may need to move a salary in Andreas Johnsson, Kasperi Kapanen or Alexander Kerfoot to gain the cap space to add a defenseman.