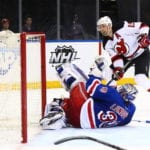 Steve Cangialosi: New Jersey Devils forward Travis Zajac will likely have his name in the rumor mill leading up to the February 24th trade deadline.

Zajac does hold a full no-trade clause. Zajac a few days ago.

“I’ve thought about the situation a lot. This is where I want to be.”

Jason (@Account4hockey): Elliotte Friedman was on 630 CHED last week. A quick summary of what he was talking about.

The Vegas Golden Knights and Gerard Gallant had contract extension talks before his firing.

The Toronto Maple Leafs will only trade Kasperi Kapanen if they get an “oh that makes sense” offer.

Minnesota Wild’s Eric Staal really hated being traded in-season before. There are not many untouchables in Minnesota.

The asking price for Los Angeles Kings forward Tyler Toffoli is a second-round pick and a prospect.

The Calgary Flames are looking for a right-handed forward.

The New York Rangers had asked goaltender Henrik Lundqvist at last year’s trade deadline if he wanted to move on. The Columbus Blue Jackets inquired last year. Lundqvist said no. doesn’t think that Lundqvist is ready just yet, but he may be more open to the idea of not finishing his career with the Rangers. It may be this offseason, or when his contract expires.

Terry Koshan of the Toronto Sun: The Toronto Maple Leafs players think they are legit Stanley Cup contenders, but with their inconsistent play, they aren’t close. They are not in a playoff position.

Adding a backup goaltender is an option, but they also could use a defenseman, even if Rasmus Sandin shows he’s NHL ready.

GM Kyle Dubas could look to add a defenseman with term at the trade deadline. If looking at rental defensemen, options could be Sami Vatanen, Brenden Dillon and Erik Gustafsson.