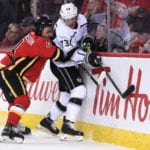 Flames looking for a top-six

TSN: The Calgary Flames have some extra salary cap space after they traded Michael Frolik and they plan on using the space according to Pierre LeBrun.

“They hope to add a top-six forward, a right-hand shot. That’s a key criteria for the Calgary Flames and it makes me think there’s certainly some interest in Tyler Toffoli from the LA Kings, among other targets.”

Oilers looking for a top-six, eyeing the Leafs?, Wild open for business

TSN: Darren Dreger says the Edmonton Oilers are in the market for a top-six winger and could be eyeing the Leafs.

And another team to watch? The Minnesota Wild. I’m told that Bill Guerin is open for business and part of the trade bait list could include veteran defenceman Mathew Dumba.”

Is there a goalie controversy brewing in Chicago?

TSN: There is a goalie controversy brewing in Chicago as they want to make the playoffs this year but are also keeping an eye on the future. Both Corey Crawford and Robin Lehner are pending UFAs.

Bob McKenzie adds that Lehner has said he won’t take a discount on a long-term deal. Crawford has said he doesn’t want to be a backup.

“Does he trade one of these guys? Which one can he sign? And I would imagine in the days and weeks ahead they will get down to brass tacks in terms of talking contract to both guys to see what the expectations are and how that decision is going to go before the deadline.”

Pierre LeBrun says to keep an eye on the Carolina Hurricanes with regards to Lehner.

“If and when Robin Lehner becomes available by the way, keep an eye on Carolina. They tried to sign him last summer and I think they’d like to add more insurance in goal. That’s a guy they have on their list.”