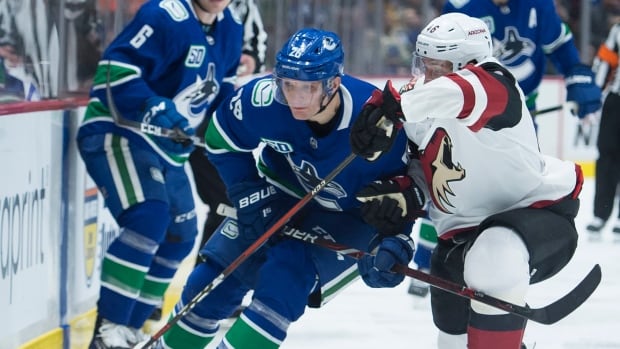 Jake Virtanen scored midway through the second period to reach a career-high 26 points in a season as the Vancouver Canucks defeated the Arizona Coyotes 3-1 Thursday night.

Elias Pettersson had a pair of assists for the Canucks, while Pearson’s goal was the 100th of his career.

The win made an already tight Pacific Division even closer. Arizona and Calgary are tied with 57 points. Vegas and Vancouver are next with 56, while Edmonton is one behind them.

Canuck goaltender Jacob Markstrom, who made his 16th start in 18 games, stopped 34 shots. He made a big right-pad save on Jason Demers late in the third period to preserve the win.

Virtanen scored the only goal of the second period. He took a pass from J.T. Miller and swooped behind the Arizona net before backhanding a shot that hit Hill’s left skate and bounced into the net. It was his 14th goal of the season, one less than his career high set last year.

The teams were tied after the first period.

A defensive miscue set up the Coyote’s opening goal at 7:59. When Vancouver defenceman Tyler Myers failed to clear a bouncing puck, Taylor Hall found Dvorak in front of the net. He scored his 12th of the season with a low shot to the far side.

Vancouver made it 1-1 on a power play at 15:01. Rookie defenceman Quinn Hughes boomed a shot from the blue line that Hill stopped only to have Horvat knock in the rebound. Horvat has 13 points (six goals, seven assists) in the last eight games.