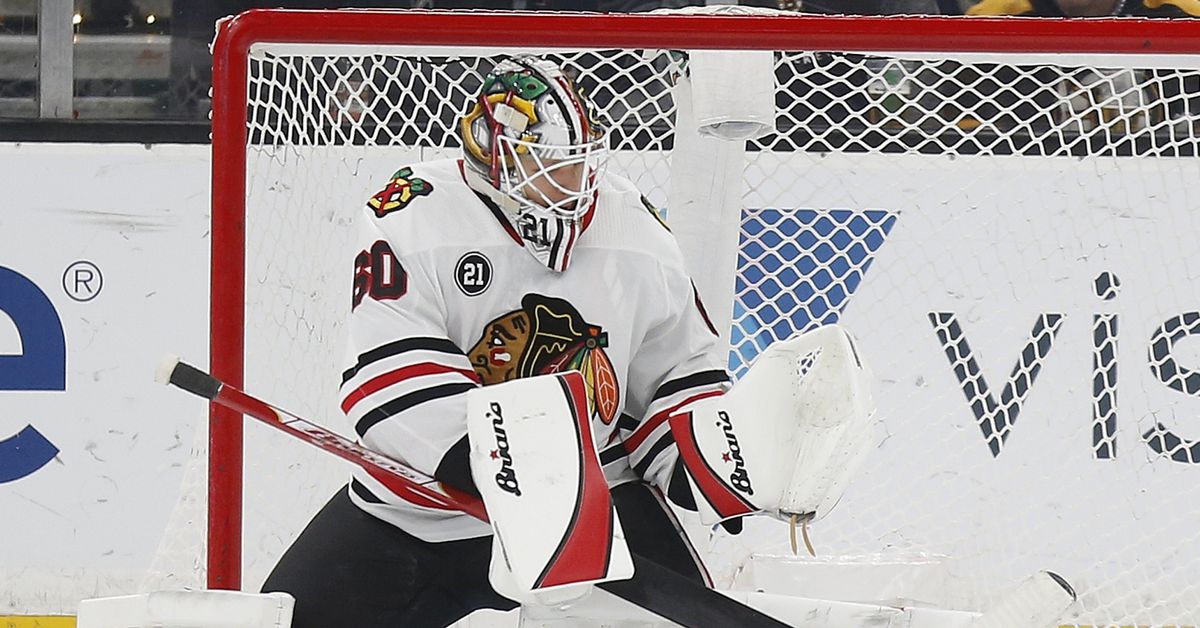 He has had a lot of thoughts to juggle lately. Since his last appearance in Chicago, he has lost his job with the Blackhawks, struggled mightily his first few months back in the AHL and dealt with an untimely storm of personal troubles.

It took months to get his life, and career, stable again.

But now it is. And now he’s ready to make a charge at the NHL again.

“I know it’s only a matter of time, quite honestly,” he said last week in Rockford. “If it’s not here, it’s with somebody else. I’d love it to be here. I have a lot of respect and commitment to this organization, and I want to be in this organization for a long time. But the reality is there’s a lot of things that are out of our control.

It has taken awhile for Delia to recover this degree of optimism.

He was technically the last cut of training camp, but he saw it coming long before then. He flew back from the Hawks’ season opener in Prague, where he was the extra goaltender sitting in the press box, and drove straight into another crowded situation in Rockford, with highly touted prospect Kevin Lankinen and AHL veteran Matt Tomkins also battling for ice time.

And through October and November, Delia decisively lost that battle for time. He made only seven appearances and allowed four or more goals in five of them, resulting in a miserable .863 save percentage.

His coaches at both levels — Derek King in Rockford, Jeremy Colliton in Chicago — looked at Delia’s horrid start and were willing to give him the benefit of the doubt. After all, the Merrimack College product earned some leash with his excellent 2018-19 season, going 13-12-4 with a .922 save percentage for the IceHogs and 6-4-3 with a .908 mark for the Hawks.

“Every player has his ups and downs,” King said. “As a goalie, if you have ups and downs, it’s more highlighted because you’re the last resort to stopping the puck.”

“It’s important to go through adversity, to fight through it, come out the other side,” Colliton said. “I’m sure, based on how last season went, he would’ve liked it to go different. But that’s not how it went.”

But Delia knew his struggles were coming from the non-hockey realms of his life.

His girlfriend (and Portiere Leather Company co-owner), Ava Lammers, was pregnant. The news came unexpectedly, and the disruptions didn’t end there. Lammers’ health suffered for a while. The two eventually posted on Instagram on Jan. 4, “Ava was sick more often than not during her first trimester.”

Delia’s anxiety about that, and the time he spent helping Lammers get the care she needed, bled into other aspects of his life.

“I haven’t been there [at the leather shop in Pilsen but] maybe two times, three times in the past three months,” Delia said. “It’s all her. And she wasn’t feeling great, so it was something that we had to take a step back and say, ‘Hey, can we still [run the company] at this time?’

“[And] when things aren’t going great off the ice or you have personal issues, your head’s not right and hockey’s the last thing on your mind. It needs to be the priority.”

But with the holidays came good news: Lammers’ health improved, and a baby boy is on the way.

Delia’s performance on the ice has simultaneously flipped. In his last eight appearances, he has a .936 save percentage and hasn’t allowed more than three goals in a game. He also has shifted his mindset from merely surviving to refining his game, focusing on improving his ability to read plays and anticipate shots.

“He’s back to where he’s working hard,” King said. “He’s doing everything right, he’s finding the puck, he’s not as scrambled, he’s stable in the net and it’s good to see him back like that.”

Still, Delia admitted he was hurt when the Hawks called up Lankinen on Jan. 4 to fill in for an injured Robin Lehner and serve as Corey Crawford’s backup.

He has nothing against the 24-year-old Finn — “Lanks has played really well, and I think he deserves a shot, too,” Delia said — but said the communication about expectations has been “challenging” because of the multiple parties involved.

“I’d love to be up there and I was upset, but you have to use it as something to motivate you to get you back there, instead of keeping it shut down,” he said. “If you do, at the end, you’re only hurting yourself and your teammates.”

But his confidence about an NHL future — re-solidified now after his nightmare autumn revealed some cracks — remains strong.

And he only needs to cite the goalie Lankinen was summoned to back up to justify it.

“Even within our own organization, you look at Corey Crawford. He played five years in the American League, and he’s a two-time Stanley Cup champion,” Delia said. “You have to see it as a springboard. You can’t see it as a roadblock. It’s something you have to use to your advantage.”

Leafs return favour to Blue Jackets with 3-goal rally, OT win to force Game 5
What We Learned About the Blackhawks in the Qualifying Round
Damien Cox: Expanding the Stanley Cup playoffs was a good idea that should stick around. It might be just the start
Prospects News & Rumors: Sellgren, Murray, Barron & More
Canucks Unsung Heroes Were Key in Game 2