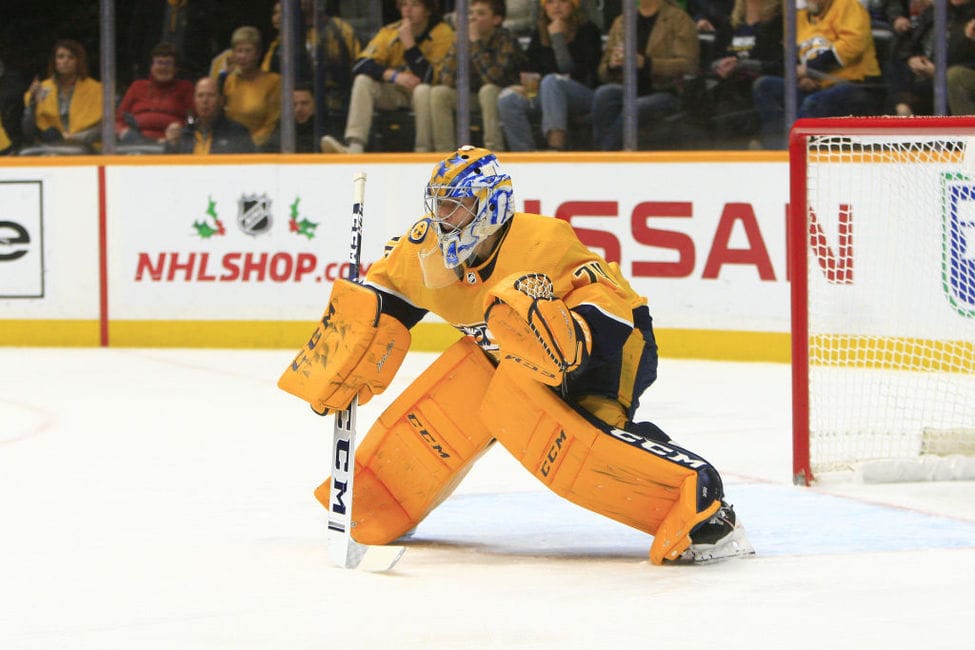 The Nashville Predators got a shutout from one of their goaltenders, which will appear to the struggling franchise like manna from heaven. We’ll discuss that and then dive into this week’s week in review ahead.

When Peter Laviolette was fired on Monday, many analysts were quick to point out the paltry numbers of his former goaltenders. In fact, Jeff Marek of Sportsnet examined every head coach dismissal since the beginning of last season – barring, of course, those fired for non-hockey reasons – and found that all but one (Anaheim’s Randy Carlyle) was fired when his goalies had a tandem save percentage (SV%) below .900. So the Predators were in desperate need of help from their netminders.

On Sunday, backup Juuse Saros took the net in a matchup with the Winnipeg Jets. The Predators had allowed eight goals in two games since announcing John Hynes as their new head coach. It was time for one of their goalies to step up to the plate.

Saros did just that, making 28 saves in the first shutout of his season. He stopped three of those shots when the Jets were on the power play and one shorthanded attempt. The Jets generated 10 high danger chances and 2.82 expected goals, but Saros stood up to them all. Kyle Turris scored the lone goal in the first period, as Winnipeg’s Connor Hellebuyck was very impressive with 31 saves of his own. After the game, Saros shared his thoughts on the important win:

It was huge. [The Predators’ defenders] were blocking a lot of shots, and we didn’t really give up too many chances. The pucks that they got [through] I pretty much saw all of them. So, yeah, huge defense and thanks for the guys… It’s a big win, we knew it was a big game, coming into this they were a few points ahead of us, so, yeah, it was big points.”

Jusse Saros on the significance of the victory

The Predators have seen two big accomplishments from their goalies this week now, with Saros’ first shutout and Pekka Rinne’s first NHL goal. Asked after the game about not following Rinne’s goal with one of his own, Saros admitted it was “disappointing.”

Andrei Vasilevsiy has been red hot in the month of January. He’s won five games, pitched two shutouts, and has a .971 SV% and a 0.80 goals-against average. Even for a five-game stretch, those are almost-inconceivable numbers. And that’s a big reason why the Tampa Bay Lightning were on a ten-game winning streak before falling to the New Jersey Devils on Sunday.

On the other end of the spectrum, Craig Anderson of the Ottawa Senators has been horrible in the month of January. He’s lost 3 games and has an .839 SV% and a 5.24 GAA. He’s allowed 73 goals on 87 shots in that period. Jacob Markstrom has also struggled, entering Sunday with a 4.15 GAA and an .874 SV%, but he’s managed to go 3-1 in that time. In fact, he posted a much stronger result on Sunday against the Minnesota Wild.

Backup of the Week

Last week, we named Elvis Merzlikins our backup of the week. The Latvian netminder was forced into more starts with the injury to Joonas Korpisalo, but he’s done a fantastic job in his new role and continues to this week. Today, our backup of the week award goes to Aaron Dell, playing in similar circumstances.

The Sharks have struggled to find consistent goaltending this season. After all, former head coach Pete DeBoer was one of the aforementioned coaches fired with poor goalie numbers. New head coach Bob Boughner was forced to make a change from Martin Jones, and so far, Aaron Dell has seized the opportunity. Boughner praised his goalie effusively in comments made to Kevin Kurz of The Athletic:

The one thing I like about (Dell’s) game is his compete (level). He battles. When you’re down and out and you think it’s an easy go, he finds a way to reach back. That’s the kind of goalie he is. He’s a fighter. He’s a battler. I think that the guys play that way in front of him a little bit.

Sharks head coach Bob Boughner on his new starter’s performance (from, ‘Aaron Dell providing the foundation as Sharks showing some signs of life,’ The Athletic, 01/12/20)

Boughner spoke glowingly of his goalie, but Dell’s numbers speak for themselves. In January, he is 4-1 with a .939 SV% and a 1.79 GAA. It’s a great opportunity for the 30-year-old. Unfortunately, no amount of good starts from Dell will erase the $28.75 million the Sharks still owe Jones over this season and the next four.

For all of THW’s goalie coverage, check out our goalie page.