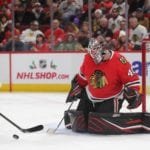 Ben Pope of the Chicago Sun-Times: Chicago Blackhawks GM Stan Bowman isn’t ready to give up on their season yet. He’s starting to talk with other GMs about the deadline, and they aren’t sure which direction they’ll head in just yet.

“Right now, we’re not chasing down any trades,” Bowman said. “Part of this time of the year is to have some conversations with other managers to see where they’re at. I think everyone’s trying to assess their team. It’s been half a season. Some trends have emerged. Some teams are struggling in certain areas. We’ve had some injuries that we’ve been able to get through.”

John Dietz of the Chicago Daily Herald: Chicago Blackhawks goaltender Robin Lehner is a pending UFA after signing a one-year last offseason. Don’t expect him to discount on his next contract.

“I’ve taken discounts my whole life,” said Lehner, who signed a one-year, $5 million deal to come to the Hawks July 1. “I’m not a guy that wants to be overpaid either.

“I want to gain some respect that I think I deserve and we’ll see if that happens or not.”

It’s possible that Lehner could be looking at $7 million-plus, which is something that wouldn’t fit in the Blackhawks payroll.

Full interview of Robin Lehner addressing his contract situation and context around his comments. #Blackhawks pic.twitter.com/dOSfO8WJ5K