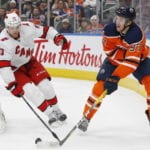 Hurricanes have the salary cap space to add

Cory Lavalette: Carolina Hurricanes GM Don Waddell said that they have the salary cap space to acquire a player with a salary cap hit in the $5 to $6 million range. That is if they don’t have any injuries and need to call up player(s).

They may also be thinking that they’d like to have the cap space at the end of the season to fit in any of the bonuses that Justin Williams could earn so that they don’t have it carried over as a bonus overage for next season.

Jim Matheson: Edmonton Oilers GM Ken Holland won’t trade his 2020 first-round pick at the trade deadline. He would likely be willing to do a second-round pick and a defense prospect for a forward at the deadline.

Michael Traikos of the Toronto Sun: Oilers GM Holland needs to make a trade now and not waste another MVP-like season from forwards Connor McDavid and Leon Draisaitl.

Holland needs to find McDavid a legit top-line winger to play with.

In the offseason, Toronto Maple Leafs Kasperi Kapanen or Andreas Johnsson could be good fits.

Right now the Oilers best option could be Ottawa Senators 24-year old Anthony Duclair. So far this season he has 21 goals in 42 games. He’s an RFA after the season.

Sean Shapiro: The Dallas Stars only have a projected $815 in salary cap space. They do have the extra room with Martin Hanzal being on the LTIR.

They could make a move closer to the trade deadline. Any move would likely have to involve ‘some mild cap gymnastics.’

Michael Traikos of the Toronto Sun: The Seattle franchise could have the option to hire a big named coach if they so choose.

Currently out of work include Mike Babcock, Peter DeBoer, and Peter Laviolette. That list could expand if coaching changes are made in Minnesota and Montreal – adding Bruce Boudreau and Claude Julien to the list.