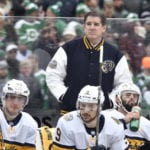 Adam Vingan: No interim coach has been named yet and who coaches tonight hasn’t been determined yet.

Pierre LeBrun: Laviolette had one more year on his contract at around $2.5 million.

Pierre LeBrun: “David Poile would have hated to do this in-season. Not his style. But he gave Laviolette a long leash to turn it around.”

Nick Cotsonika: “The Predators have had one general manager (David Poile) and two coaches (Barry Trotz and Peter Laviolette) in their history. Poile never made a coaching change in-season before.”

John Shannon: “David Poile has been a GM for more than 37 years in the NHL. The firing of Peter Laviolette is just the 4th time he has removed the coach.”

Adam Vingan: “The next coach of the Predators will be the sixth to work under David Poile in his 37 years as an NHL general manager with NSH/WSH.”

Adam Vingan: Sources tell The Athletic that as of last night former San Jose Sharks head coach Peter DeBoer has had “no contact” with the Nashville Predators.

Abbey Mastracco: “This is purely speculative but John Hynes to Nashville would make sense given the David Poile-Ray Shero connection. Poile is Shero’s mentor and people around the league still hold Hynes in very high regard.”

Tom Gulitti: “With San Jose in DC yesterday, I was wondering if Pete DeBoer would be a fit with Predators if they decided to make a coaching change.

DeBoer could be content to sit out rest of season and get a fresh start somewhere next season, but there might be a chance to win with Preds.”

Adam Vingan of The Athletic: Assistant coach Dan Muse and Dan Lambert held on to their jobs for now.

Peter DeBoer hasn’t been in contact with the Predators as of last night. Milwaukee (AHL) coach Karl Taylor not expected to be the next Predators coach.

DeBoer is making $3 million a season from the Sharks through 2021.

Hynes is still getting paid by the Devils for a few more years. Hynes played with Predators assistant GM Jeff Kealty at Boston University.

Babcock is owed over $20 million from the Toronto Maple Leafs through 2023.

The Ducks’ Ones That Got Away: Part 1
Devils’ Scott Stevens – Dirty or Tough?
Predators May Have Their Future Backup Goalie in Ingram
NHL extends coronavirus self-quarantine guideline until April 15
IceHogs sign Mitchell through 2020-21