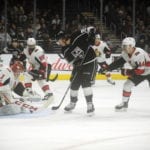 Notes on the Predators, Sabres, Penguins, Bruins, and Senators

Bruce Garrioch of the Ottawa Sun: Nashville Predators GM David Poile has been trying to trade Kyle Turris for the past year. Coach Peter Laviolette could eventually take the fall but Poile said it doesn’t appear to be an option at this time. Former New Jersey Devils coach John Hynes could be a top candidate if they decide to make a change behind the bench.

The Buffalo Sabres traded defenseman Marco Scandella, and could still move defenseman Zach Bogosian and/or Evan Rodrigues. Sabres GM Jason Botterill may be feeling the heat as they are outside the playoffs again. They could be looking to add more forward depth.

The Pittsburgh Penguins are unlikely to move pending RFA goaltender Matt Murray this season. He makes $3.75 million this year and is arbitration-eligible. May need to watch this situation during the offseason.

There is some belief the Boston Bruins have spoken with the New York Rangers about Chris Kreider. The Rangers are still deciding if they want to move Kreider or not.

Ottawa Senators pending UFA center Jean-Gabriel Pageau will get the interest from a lot of teams if they decide to make him available. The Senators are expected to talk to him about an extension before making a decision. The Penguins, Bruins, Calgary Flames, Edmonton Oilers, Winnipeg Jets, and Colorado Avalanche would be among the teams.

The Flames are looking for scoring help.

Los Angeles Kings forward Tyler Toffoli will get some interest before the trade deadline.

Sportsnet: The Calgary Flames have about $4.8 million in salary cap space after moving forward Michael Frolik to the Buffalo Sabres. If the Flames make a move to add someone, they will be looking for players with term.

“From what I understand, they’re not really that interested in rentals,” Elliotte Friedman said during the Headlines segment on Hockey Night in Canada on Saturday. “They prefer somebody with term, that’s what their preference is if they try to add someone.”

“If he’s a centre, I think they look for right wings,” Friedman said. “I think if he moves back to the right wing, they’ll look at some other options that they can possibly do.”