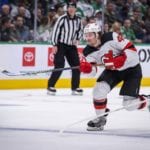 The Fourth Period: New Jersey Devils GM Ray Shero has his eye towards next year and he’s looking to retool their blue line.

It is believed that Shero has some interested in Buffalo Sabres defenseman Colin Miller.

It’s not known what the Sabres would be looking for if they moved Miller.

Vatanen open to talking to the Devils

“I don’t really think about that too much. If you play good, usually teams want to keep you there,” Vatanen told NJ Advance Media. “Sometimes you think about what’s going to happen. I don’t have a contract for next year or anything like that. Sometimes you think it would be nice to get done, get the contract done and have some safety and know the future, playing wise. It’s part of the business. You never know what’s going to happen. Like in Anaheim, I had just signed a deal there and they traded me away a couple years later. You never know. It’s part of the business, you’ve just got to do your best and try to help your team to win.”

Vantanen hasn’t had any contract talks with Devils GM Ryan Shero or his agent. He’s open for talks if they reach out to him.

“I haven’t talked to anybody right now. I’ve just been playing hockey,” he said. “We’ll see if they reach out to me like that, what’s going to happen. I’ve liked it here a lot and it’s been fun to be here.”