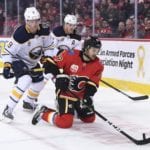 Salary cap asset for the Flames

“You always want to improve your team, but No. 1, you need to have some room to do it,” Treliving said. “This now gives us some flexibility. That doesn’t necessarily mean anything is imminent in the next 10 minutes, but it’s difficult to look at other opportunities until you have the space to accommodate it.”

Treliving adds that cap space is one of the most important assets to have. It’s been well known that he’s been trying for months to create some space. The Flames were able to do so without having to include a draft pick or prospect to sweeten a deal.

Darren Dreger: It is sounding like the Buffalo Sabres are still looking to make moves and are willing to move more pieces.

John Vogl: Buffalo Sabres GM Jason Botterill on his players that have made trade requests.

“I can’t control what a player or his agent or whatever ends up saying to the media, but it also doesn’t impact or dictate what we’re going to do with our team here. The bottom line is, I think you look around that room, there’s always going to be some expectations. There’s always going to be some players who are disappointed with their role or want more ice time or opportunity. But it’s also our belief that what we’re trying to do is create more competition within our team. We have to build up our depth. We have to build and have more internal competition for roles. There’s always going to be players that are a little disgruntled, but I think for the majority, our players are very excited to be working with Ralpha and excited where our team is going.”