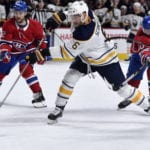 Sabres trade Scandella to the Canadiens

The Montreal Canadiens have acquired defenseman Marco Scandella from the Buffalo Sabres for a 2020 fourth-round pick. The pick originally belonged to the San Jose Sharks.

John Shannon: “Scandella being moved by Buffalo to Montreal makes a ton of sense on so many levels. Sabres have a ton of depth on the blue line. Told that Rochester has the best D corps in the AHL.”

Cap Friendly: “After trading Marco Scandella ($4M AAV) and acquiring Michael Frolik ($4.3M AAV), we now show the Buffalo #Sabres with $2,287,500 in LTIR relief remaining, a difference of only $300k prior to the trades.”

Lance Lysowski: “Lawrence Pilut should replace Scandella in the Sabres’ lineup. Yep, I’m with you guys. Colin Miller hasn’t been strong on the left side. Now have some cap room to acquire a forward.”

Jeremy White: “At the end of it all, it ends up looking like the absolute easiest trade of all time. Guy out. Guy in. Moving a worthless 4th round pick in the process. It took six months to get that done. A pair of pending UFAs. The entire league needs new GMs.”

Flames trade Frolik to the Sabres

The Buffalo Sabres have acquired forward Michael Frolik from the Calgary Flames for a 2020 fourth-round pick that originally belonged to the San Jose Sharks.

Frolik carries a $4.3 million salary cap hit and there was no salary retained in the deal.

Eric Francis: Flames GM Brad Treliving on the trade: “The return is cap space. We didn’t trade to keep it in our pocket. Our intention is to go out and make the team better. This is a big part of it.”

Mike Harrington: “Quick thought on trade: Frolik is a longtime veteran in this league who won a Stanley Cup in Chicago, been in 47 playoff games and won a world championship for the Czechs. You need those kind around here.”

Eric Francis: “Flames swap Michael Frolik to Montreal’s for 4th round pick, opening up $4.3 million in cap space. Frolik was a solid, versatile team player for years, but was seen as a 4th- liner here of late, making this a savvy move to set up something bigger at deadline.”

Lance Lysowski: “I’m told Michael Frolik is excited about being traded to the Sabres. Still no word when he’ll arrive in Buffalo since he has to go through visa process.”