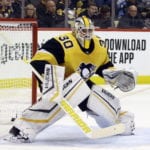 Dan Kingerski of Pittsburgh Hockey Now: The Pittsburgh Penguins have lost their top winger, Jake Guentzel, for four to six months and fans are hoping for a trade to help replace the offense lost.

What do the Penguins have to offer up? Defenseman Justin Schultz‘s name has come up on social media, but their right-side is better with him in the lineup.

Could they package a prospect like Calen Addison or Pierre-Olivier Joseph and a pick for a scoring winger?

Rob Rossi of The Athletic: Jake Guentzel was on pace for 40 goals this season. He’s likely out until next season.

Adding Guentzel to the LTIR will give them some additional cap space to use ahead of the trade deadline.

GM Rutherford had told the Athletic that they are likely going to wait until the trade deadline to make any moves, but does Guentzel’s injury alter that plan? A couple of days ago he said it is “too early to tell” and added:

“I need some time to think through this,” Rutherford said.

Rutherford should be okay with moving their 2020 first-round pick. His top trade target should be New York Rangers winger Chris Kreider. The pending RFA carries a $4.625 million salary cap hit and will likely be looking to test the free agent market.

Rossi thinks the Penguins should see what kind of trade interest there is for goaltender Matt Murray. Murray is a pending RFA with a $3.75 million cap hit. There haven’t been any serious contract talks since he’s been eligible for a contract extension on July 1st.

Adding Ilya Kovalchuk for the rest of the season on a cheap deal may make a lot of sense, but Rutherford is not interested.