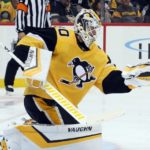 Is there a turnaround in store for Matt Murray?

Rob Rossi of The Athletic:  A welcome sight for Pittsburgh Penguin fans but not necessarily Jim Rutherford, would be a Murray second-half rebound. Murray said he “felt good” was not an indication of contentment as much as some progress. It has been a rough year for Murray, who has won four times since Halloween. Tristan Jarry garners more and more starts with his play while Murray has struggled.

Ultimately, Pittsburgh needs Murray to be that thief who played a lights-out second half against the Nashville Predators. Anything less dooms both Murray and the Pittsburgh Penguins.

Rob Rossi of The Athletic:  So, does anyone expect Rutherford to not do something soon? This is a general manager who has made 40-plus trades including 22 with the Penguins throughout the previous three seasons. The Carl Hagelin deal was done in January and the Tanner Pearson deal in November for example.

“I mean, there’s not pressure right now to make a move. But the fact of the matter is I haven’t seen the team. So, even though we’re so many games into the season, it’s not like we’re playing at full-strength and we have a clear picture of what our team is. That’s why I’ll probably keep going until the deadline.”

Rutherford acknowledged he is not sure what Pittsburgh has at this point due to all the injuries but that another one may trigger a move sooner. He tip-toes through his goalie situation, expiring contracts, and injuries which means it will be a long lead-up to the deadline.

Max Bultman of The Athletic:  Eric Comrie claimed off waivers by Winnipeg ended the Detroit experiment which lasted just two games. Is there a plan beyond Jimmy Howard?

Jonathan Bernier represents no solution at 31 and Filip Larsson (top goalie prospect) was sent down to Toledo (ECHL) from Grand Rapids (AHL) after a disappointing start. He has not truly recovered.

A trade for a goaltender is a viable option and a team like the New York Rangers could move one of their goalies. Pavel Francouz of Colorado is one to keep an eye on in the shorter term.

The free-agent market and waiver wire remain options because Detroit’s alternative is that scary heading into the 2020-21 season.