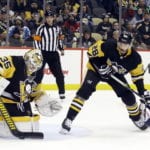 A couple of needs for the Penguins

Dan Kingerski of Pittsburgh Hockey Now: The Pittsburgh Penguins have a 21-11-4 record coming out of the break despite dealing with a ton of injuries.

Ahead of the trade deadline the Penguins could use a shooting winger that can score.

On the blue line the Penguins could use a physical, left-sided defenseman. Calgary Flames T.J. Brodie and Travis Hamonic are pending UFAs that could be on the move.

Matt Vensel of the Pittsburgh Post-Gazette: Pittsburgh Penguins defenseman Marcus Pettersson signed a one-year contract this past offseason and is eligible to sign a new deal after January first.

The Penguins and Pettersson basically had a multi-year contract in place in the offseason but the Penguins didn’t have the salary cap place – which led to the one-year deal.

“We owe it to him to have that discussion at the earliest time we can have it,” the GM said. “We both agreed to do a different contract that he ultimately took because it’s the only thing we could do with the cap situation. Now that we’ve moved Gudbranson, we’ve got some cap space .”

Penguins GM Jim Rutherford doesn’t plan to make any urgent moves with regards to his goaltending situation. He’s not looking to trade a goaltender right now. He did say:

“You don’t know what’s going to come up between now and the deadline.”

Both Matt Murray and Tristan Jarry will be restricted free agents after the season. There is no rush to move on either and Rutherford said that things will take care of themselves over the next few months.