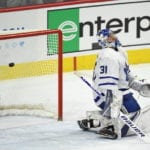 Goaltending depth is an invaluable component for a successful NHL franchise. As important as it is to have a reliable starting netminder, having a good backup is vital in case the starter slumps or becomes sidelined by injury.

Lack of depth between the pipes has been an issue for the Toronto Maple Leafs since last season.  Starter Frederik Andersen ranks among the league’s best goalies, but Garret Sparks and Michael Hutchinson were underwhelming as his backups.

As the Leafs attempt to climb up the standings following a shaky start, they risk burning out Andersen, leaving him exposed to potential injury. If that happens, they can forget about reaching the playoffs this season.

General manager Kyle Dubas is undoubtedly scouring the NHL trade market for help. However, a lack of salary-cap space and worthwhile trade options could handcuff his efforts.

CapFriendly indicates the Leafs have around $1.2 million in salary-cap room. However, they’ve been forced to juggle their cap room throughout the season, recently losing winger Nick Shore through waivers to Winnipeg as a result.  They must also ensure they have sufficient space for when Andreas Johnsson comes off long-term injured reserve.

Sportsnet’s Rory Boylen recently listed 10 potential backup trade targets for the Leafs. Half of them, however, are AHL goalies with limited NHL experience.

Boylen also suggested Ryan Miller of the Anaheim Ducks as an option. Now 39, he is well past his best-before date, plus his family is well-established in California. As his career winds down, he’s unlikely to accept a trade back east.

The New York Rangers’ Alexandar Georgiev, the Pittsburgh Penguins’ Tristan Jarry, and Casey DeSmith, and the Los Angeles Kings’ Jack Campbell are the best of Boylen’s bunch. Acquiring them, however, won’t be easy.

Georgiev, 23, is playing very well as Henrik Lundqvist‘s backup. He’s also just three games shy of 60 career NHL contests. Once he reaches that mark, he becomes eligible for waivers if the Rangers attempted to send him down to their AHL affiliate in Hartford.

There was talk suggesting the Rangers could demote Georgiev and call up promising Igor Shesterkin.  Blueshirts GM Jeff Gorton downplayed that notion. Considering how well Georgiev is playing, Gorton seems reluctant to part with him.

Jarry’s playing very well as he splits the Penguins’ goalie duties with starter Matt Murray. Given the latter’s injury history, GM Jim Rutherford is probably unwilling to move the 24-year-old Jarry. That could also make him reluctant to move DeSmith.

Campbell could be a good choice, provided the Kings are confident in bringing up promising Cal Petersen as Jonathan Quick‘s backup. Quick’s struggles this season, however, could make the Kings uneasy about rushing Petersen into that spot.

That’s not to say none of those goalies become available. The rebuilding Kings’ playoff hopes are rapidly fading. Should the Rangers or Penguins tumble down the standings, they might be more inclined to move a goalie.

The problem, however, is those clubs might not be willing to make a move until later in the season, perhaps closer to the Feb. 24 trade deadline. The Leafs need goaltending help right now.

That need could turn to desperation if the Leafs struggle to rise in the Eastern Conference standings. Rather than a draft pick or prospect, they could be forced to give up a decent roster player.

For now, bandaid solutions appear to be all that available to the Leafs. They won’t be enough if Andersen tires. If he gets hurt, the Leafs are sunk.