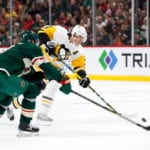 Perhaps no team has dealt with injuries to the extent of the Pittsburgh Penguins.

From Kris Letang and Justin Schultz to Patric Hornqvist and Nick Bjugstad, one Penguins player after another has been forced out of the lineup.

It’s okay, though, because they have Sidney Crosby and Evgeni Malkin. When the latter went down, Crosby helped keep the team afloat. With Crosby out, Malkin is now doing the same.

It’s been 13 games since arguably the league’s best two-way player decided to get surgery to treat a sports hernia. The Penguins, surprisingly, have not missed a beat without him, going 8-5-0 with a +15 goal differential.

They can thank Malkin for that.

While the top line as a whole has been fantastic, it is Malkin driving the bus for the Penguins.

He has been absolutely lethal offensively, piling up 50 chances and 20 points (six goals, 14 assists) in just 13 outings.

Malkin has registered a point on ~87% of the Pittsburgh goals he’s been out for. That’s the highest total among the NHL’s leading 35 point-getters over the last 13 games.

They have absolutely obliterated opponents with him on the ice at 5v5, out-scoring them 16-10 while holding a ridiculous +61(!) chance differential, good for tops in the NHL.

If there was any doubt the 33-year-old could still take games over like the 100+ point player we saw a decade ago, I think that’s gone.

The Minnesota Wild started their 2019-20 campaign in the worst way imaginable.

They were extremely slow out of the gate, going 4-9-0 with a minus-15 goal differential in the month of October. The season already seemed like somewhat of a lost cause and many were calling for the head of coach Bruce Boudreau.

Since that point the Wild have flipped the switch like no other, going 10-3-4 and ranking tied for 6th in the NHL with a remarkable .706 points percentage. They’re suddenly within two points of a Wild Card spot as a result.

While improved play from their goaltenders – the Wild rank 12th in 5v5 save percentage since Nov. 1 – factors in largely, perhaps no player is more responsible for the team’s success than Jared Spurgeon.

The criminally underrated defenseman has played lights out for the Wild, even by his impressive standards.

With Spurgeon on the ice at 5v5, the Wild controlled a team-leading 52.95% of the shot attempts, 56.22% of the scoring chances, and 61.41% of the expected goals. He had a +7 goal differential as a byproduct of that on-ice domination.

Spurgeon’s individual outputs were strong as well. He chipped in 10 points and ranked 2nd on the Wild in both total assists (nine) and primary assists (five).

He did it all, really, and is the driving force behind what is a surging Wild team.