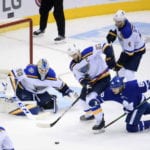 Some forward trade options for the Islanders

Larry Brooks of the NY Post: The New York Islanders should be in the New Jersey Devils Taylor Hall sweepstakes. The cost would be high as the Devils could ask for Noah Dobson as part of the package.

If the Islanders feel the asking price is too high for Hall, what about New York Rangers forward Chris Kreider?

Another fallback option for the Islanders could be Devils forward Travis Zajac, who has another left on his deal at $5.75 million. Islanders GM Lou Lamoriello was the one who originally signed Zajac to his eight-year deal.

James Mirtle of The Athletic: The right side of the Toronto Maple Leafs blue line remains in question for this season and beyond. They are currently running out Cody Ceci, Tyson Barrie and Justin Holl.

One pending UFA that might draw interest from the Maple Leafs is current St. Louis Blues defenseman Alex Pietrangelo.

A six-year deal could put him in a $9 million per range.

Could the Maple Leafs be able to fit in another large contract like that? The salary cap ceiling for next year is rumored to be in the $84 million range.

It’s unlikely that the Blues would trade Pietrangelo in-season. He has a full no-trade. Does he even want to leave St. Louis? It doesn’t seem like there have been any contract extension talks between the Blues and Pietrangelo.

Sportsnet Chris Johnston has reported that Blues GM Doug Armstrong and staff have been watching the Maple Leafs of late.

Does it make sense for the Leafs to pursue Pietrangelo this offseason? Would think you would have to consider it, especially if you don’t have to give up any assets if signing as a free agent.

The Leafs could then consider moving a higher-priced forward for “a quality backup and another solid defenseman.”