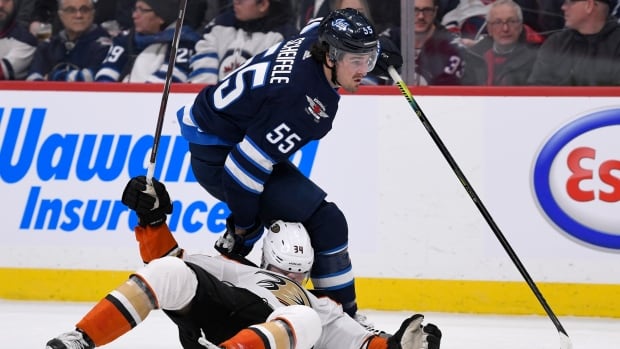 Mark Scheifele scored twice as the Winnipeg Jets won their third straight home game with a 3-2 victory over the Anaheim Ducks on Sunday.

Scheifele got the game-winner on the power play with 4:22 remaining in the third period when he beat Anaheim goalie John Gibson with a shot over his glove. It was Scheifele’s 400th NHL career point.

Adam Lowry also had a goal for Winnipeg, which is 5-1-1 in its past seven games. Mathieu Perrault contributed a pair of assists.

Jakob Silfverberg scored his team-leading 11th goal and Devin Shore recorded his first of the season for Anaheim, which is 1-3-1 in its last five games.

The game was tied 1-1 after the first period and the Jets led 2-1 after two.

Scheifele scored his 12th goal of the season with a one-timer that beat Gibson at 9:02 of the first.

Silfverberg tied it up 32 seconds later after Rickard Rackell forced a turnover and sent Silfverberg a no-look backhand pass from behind the net.

Jets forward Nick Shore, picked up on waivers from the Toronto Maple Leafs last Wednesday, made his Winnipeg debut.

Shore started as the fourth-line centre between Joona Luoto and Logan Shaw, but briefly moved to the third line after Lowry took a puck to the hand and left the bench to get it checked out.

Lowry didn’t show any ill effects when his high shot broke the tie with 1:51 remaining in the second. His third goal of the season ended a nine-game drought.

Both netminders made some key saves in the middle period.

Hellebuyck stretched out to make a pad save on an Ondrej Kase breakaway shot, while Jets forward Jack Roslovic shook his head after Gibson turned aside his quick blast with three minutes left in the period.

Lowry’s third goal of the season at 18:09 ended his nine-game goal drought.

Gibson’s strong play kept it a one-goal game early in the third until Shore scored at 8:04 during a scramble in front of the Winnipeg net, and Hellebuyck sprawled in his crease.

Anaheim captain Ryan Getzlaf assisted on the goal, extending his point streak to three games with a goal and three helpers.

Scheifele’s goal at 15:38 gave him 13 on the season, tying him for the team lead in goals with Nikolaj Ehlers. Scheifele is also one point ahead of teammate Patrik Laine for most points with 28.

For the Winnipeg Jets, the strangest season ever ends with a Kubrick-worthy anticlimax
It’s time for Matthew Tkachuk to get back to scoring if Flames hope to beat Jets
Laughton scores twice to lead Flyers past Capitals
‘He has all the potential in the world’: Why the Blackhawks are bullish on Kirby Dach
Jets Can’t Lose at 2020 NHL Entry Draft