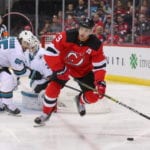 Taylor Hall by the numbers…

Jonathan Willis of The Athletic:  Again, Taylor Hall represents the top commodity in this trade market. Any trade will net a ton in value. However, the real question is how long will Hall stay productive. Can he extend that to his mid-thirties or come close?

Among Taylor Hall’s comparables, Zach Parise represents the closest match. If Parise had signed a seven-year deal, he would still be lauded as a productive player. His WAR had hovered around 4.6-4.8 in his platform years. That was slightly lower than Hall’s peak. The forward could be a first-line player still or injured or worse.

That’s the risk one takes when extending a free agent or traded player.

Eric Stephens of The Athletic:  Anaheim needs a player to take the baton from Ryan Getzlaf. Hall would fit that bill. The known is his speed. The unknown is how does Hall age. He played ten years already. A seven-year extension takes him into his mid-30’s. Again, what kind of forward will he be then?

Anaheim could include Ondrej Kase and a first-round pick to sweeten the deal. Realistically, it appears the Ducks are a year or two away which puts them out of the Taylor Hall sweepstakes.

Would Taylor Hall to San Jose be possible?

Kevin Kurz of The Athletic:  San Jose made big splashes in the past and most recently Erik Karlsson (who they eventually extended). One cannot count Doug Wilson out completely in the Hall Sweepstakes.

Adding Hall would hit the insurmountable range. San Jose needs a right-winger and not a left-winger. Also, San Jose does not have a 2020 first-round pick and probably doesn’t want to give up their 2021 first-rounder. Remember, the Sharks do not have a 2021 second either.

Would New Jersey retain enough salary to make a deal happen? They are allegedly willing to but for how much? Hall to San Jose just seems very unlikely at this time.