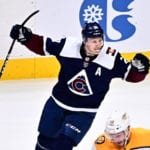 MacKinnon would take less again on his next contract

“I was just excited to get paid that much money at such a young age,” MacKinnon said Wednesday from his visitor’s room stall in Toronto. “Obviously it’s pretty (team) friendly now, but I was worth that at the time … I have no regrets.”

Recently some RFA aren’t signing early and holding out for more money.

“I think you want to get paid what you’re worth,” he said. “I’d probably do the same thing. If a team isn’t paying you what you think you’re worth, holding out is something (players) are entitled to … I think it’s going to continue that way.”

MacKinnon doesn’t want to have the Avs in a situation like the Maple Leafs are in with three players taking up over $33 million.

“We have guys that we wouldn’t (otherwise) be able to bring in,” MacKinnon said. “On my next deal, I’ll take less again. Because I want to win with this group.”

TSN: Colorado Avalanche forward Nathan MacKinnon said that he would take less on his next contract to help retain/gain more players as he wants to win with this group.

“I spoke with his agent Pat Brisson earlier, and he said No. 1, MacKinnon wants to win. He wants to win a Stanley Cup with the Avalanche and if the pieces are right and they are in place and his contract were expiring, then yeah perhaps he’d be willing to take less money, but what’s the salary cap going to look like at that point? If it’s $90-plus million, taking less might be going from $14 to $13 million or $13 million down to $11.5 million so there’s a lot of work to get done before that happens.”