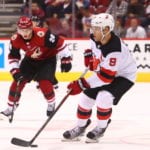 TSN: Darren Dreger said there is lots of trade speculation on who might be interested in New Jersey Devils forward Taylor Hall. One of the teams interested is ….

“But I can tell you there is at least one team who is definitely interested in acquiring Taylor Hall and that is the Arizona Coyotes. When you look at past transactions like this, what it might take to acquire a player like Hall, based on his status, the Arizona Coyotes aren’t concerned about that at this point. But again, there’s a lot of discussion that has to happen moving forward.”

Pierre LeBrun adds that Colorado Avalanche are another team that has come up a lot as they are a contender, have the cap space and the assets to acquire him. When asked about making an impactful trade, Avs GM Joe Sakic said he wants to see the team healthy first before deciding on what they need, and adds that he also doesn’t want to disrupt their chemistry. LeBrun notes:

“But, who’s kidding who? And these are my words, (add comma) not his. You talk to people around the league, the Avs looked at this, they’ve talked about it internally. They have what it takes to make this move if they decide to do it.”

“My understanding though, is that the New Jersey Devils have not set up any parameters of any kind in terms of specifics as to what it will take and instead it is more , hey, make your best offer. And general manager Ray Shero seems to be wide open to consider anything. Package deals, one-for-one. If there’s a team that’s got a cap issue, maybe taking back salary or retaining salary.”

A Hall trade could happen at any point between now and the trade deadline.