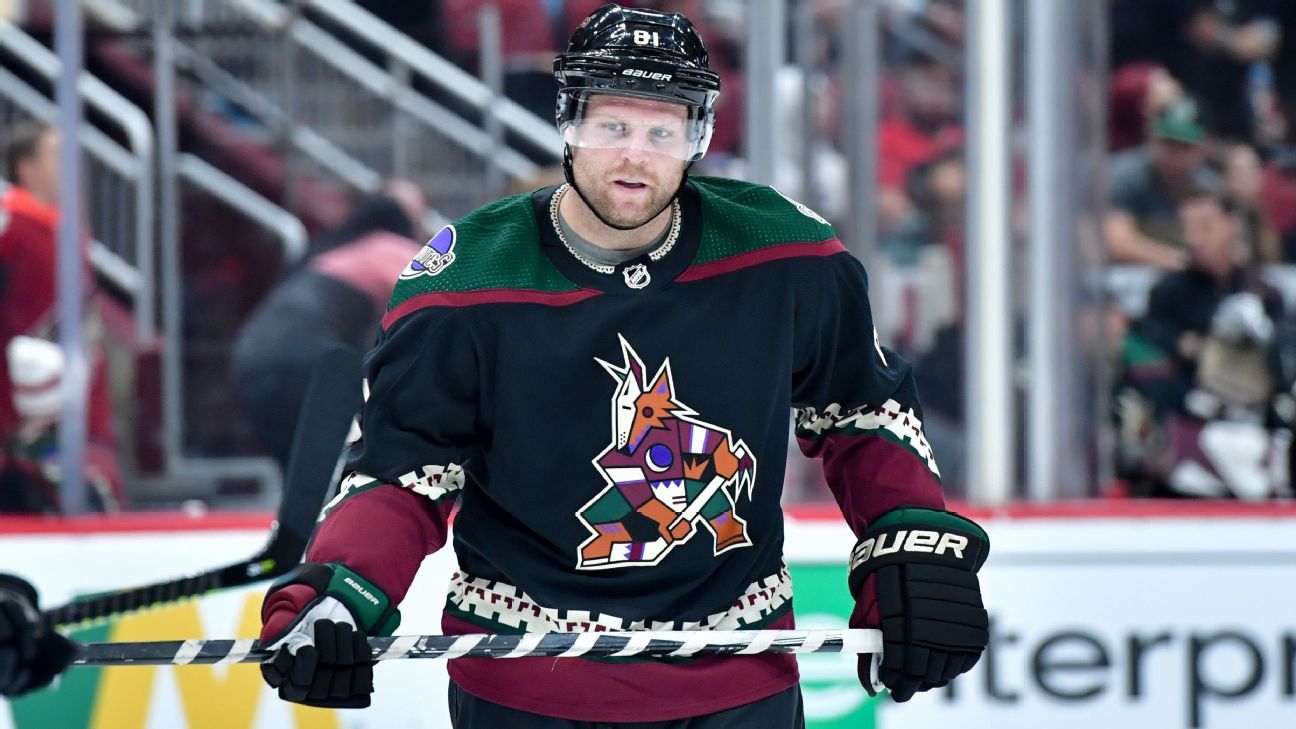 December has started with a roar in the NHL, as we’ve seen some monster individual performances and another coach fired. It’s time to pull together a panel of experts to discuss some of the hot topics as the third month of the 2019-20 campaign goes into full swing.

In this edition, we’re buying or selling the following:

1. Phil Kessel will finish the season with 30 or more goals.

Emily Kaplan, national NHL reporter: Sell. Kessel should hit 20, though, something no Yotes player did last season. While Kessel’s production isn’t where we expected (and overall, he hasn’t given the Coyotes’ power play the boost they had hoped for despite two goals Thursday), he brings other intangibles that will help Arizona actually make the playoffs this spring.

Vince Masi, ESPN Stats & Information: Sell. There have been 54 forwards over the past five seasons who had at least 60 shots and a shooting percentage through the first 30 games of a season near Kessel’s this season, and they finished with an average of 16 goals. According to Moneypuck, Kessel’s expected goals is right around what his total has been this season, so he appears to be underperforming, even with a shot pace around what he’s posted in his career.

Ben Arledge, NHL editor: Sell, but I do buy what Emily suggests. Kessel will score 20-25 goals this season. Only one of his four goals has come at even strength this season, and Arizona’s power play won’t be anywhere near the top-five unit that the Penguins boasted over the veteran’s last three seasons in Pittsburgh. So 30 isn’t happening. But he’s too talented a scorer to suddenly miss the 20-goal mark for the first time since 2007-08, and his 5.6% shooting percentage is due a few upward ticks.

Sachin Chandan, fantasy hockey editor: Sell. I believe he’ll have a strong second half, but 30 is out of reach, as he’d need a 19% shooting rate over his next 140 shots to hit 30. If he can hit it, he’d be a must-buy fantasy player.

Kaplan: Buy. Many worried how Bobrovsky’s contract would age in Years 5, 6 and 7 of the deal, but few could have predicted we’d see these struggles this early (he’s still at a sub-.900 save percentage and 3.48 goals-against average, by far career-worsts). Florida is looking like a playoff team in spite of Bobrovsky, not because of him.

Masi: Buy. He has the second-lowest overall save percentage in the NHL. According to Corsica Hockey, he has the second-worst goals saved above average total at 5-on-5, and Moneypuck has him with the third-worst save percentage below expectation in that setting. Imagine what the Panthers’ record would be if they weren’t averaging just over 3.5 goals in support of him.

Catch hundreds of NHL games streaming live or on replay this season on ESPN+. Click here for the upcoming schedule and to learn how to subscribe.

Arledge: Sell. We’re two months into a seven-year deal, and the only reason anyone is panicking is because it’s the first two months. There was an immediate acknowledgement that the Panthers would take a hit for the 31-year-old goalie’s lengthy deal on the back end of the term, and even an MVP-caliber start to 2019-20 wouldn’t have changed that. Sure, no one expected such a hit on the front end, but goaltenders run into rough patches, and I don’t foresee this being telling of Bobrovsky’s level of play over the next few seasons. Save the regret for four years down the line.

Chandan: Sell. It’s too early to say regret, but there is concern. I still believe he could regain his typical late-season form, in which he has averaged a .929 save percentage in March and April over his career.

Kaplan: Sell. Unfortunately for Rangers fans, this team is going to tantalize with their potential over the next few months (like that recent stretch we saw where they won four of five). New York’s atrocious defensive play will be their ultimate undoing.

Postgame analysis and highlight show airing each night throughout the season from Barry Melrose and Linda Cohn. Watch on ESPN+

Arledge: The heart says buy, but the brain says sell. There’s always a young surprise team with tons of talent in the playoff field, and the Rangers do fit the bill there. They are ahead of their rebuild schedule and are at least making some noise in the East. But the Rangers seem lost in the defensive zone and, worse, don’t seem to know how to exit it when they do gain possession. Then you look at the other teams in the conference — there aren’t any pretenders currently in a berth, and the Lightning and Leafs are both outside the field right now — and it just doesn’t look feasible.

Chandan: Buy. It’s possible, as the Rangers have managed to remain in the playoff race despite facing the 10th most difficult strength of schedule and despite Mika Zibanejad missing much of their November run. They sit four points back with two games in hand on each of the teams above them in the wild-card race.

4. Jack Eichel has graduated to being one of the NHL’s top 10 players.

Kaplan: Sell. He’s on the cusp, but I’m not quite ready to put him there yet. I’d still put these 10 forwards ahead of him (in no specific order) Connor McDavid, Leon Draisaitl, Sidney Crosby, David Pastrnak, Brad Marchand, Nathan MacKinnon, Patrick Kane, Alex Ovechkin, Aleksander Barkov, Auston Matthews.

Masi: Sell. There are some encouraging signs that maybe he’s ready for his elite player card, as his total points per 60 minutes at 5-on-5 has increased each season. This season may be an overwhelming outlier, though, as he has posted a 5-on-5 shooting percentage of 14% on his lowest shots per 60 minutes rate since his rookie season.

• The secret life of NHL dentists »
• From mascot to meme to megastar: How Gritty took over the world »
• The NHL’s love affair with hair »
• The struggle is real: Why hockey butts and jeans don’t mix »
• The definitive NHL mascot rankings »

Arledge: Sell. He’s elite, but not top-10 elite. There are too many ridiculous talents in the game today. That said, his numbers aren’t fraudulent: His 17 goals (seventh in the NHL) are coming on a 16.3% shooting percentage that exceeds his career averages by a good deal but isn’t any form of anomaly among the league’s best scorers; moreover, only four of his tallies have come with the man advantage. A full extra minute of average ice time certainly helps the raw numbers, but it also shows an increased confidence in Eichel from the Sabres’ coaching staff.

Chandan: Buy. If we’re taking the temperature for this season, I’d say he deserves a place. He’s been an elite scorer this season at even strength and for your fantasy team, and the only players I’d put ahead of him right now are McDavid, Draisaitl, Pastrnak, MacKinnon, Marchand, Ovechkin, Kane, Panarin and John Carlson.

5. Someone other than the Blues will be the No. 1 seed in the Western Conference.

Kaplan: Buy. The Blues have played admirably considering how banged-up they are — they’re 12-4-3 since Vladimir Tarasenko went down and have weathered injuries to Oskar Sundqvist, Alexander Steen, Sammy Blais and others — but it might catch up to them eventually. The Avalanche are getting healthier, faster, and could make a big splash at the trade deadline considering they have the cap space and assets for it.

Masi: Buy. While it’s impressive the Blues have been able to get off to this start with all their injuries, this is the Avalanche’s conference — and they’ve been hit by the injury bug as well. Colorado is second in Moneypuck’s power score rankings behind the Boston Bruins, and the Avs have seen an uptick recently in their five-game moving average in expected goal differential.

Arledge: Buy. While the Blues hold a nice six-point lead on the Avalanche in the Central Division, they also have three games in hand. No team is going to run away in a race that’ll go down to the season’s final week, but I’ve got the Avs taking the top seed when the dust settles. Even though Colorado missed Mikko Rantanen and Gabriel Landeskog for a good deal of time, it still leads the NHL in scoring by a healthy margin, with 3.7 goals per game.

Chandan: Sell. The Avs are charging fast on their heels, but the Blues hold slight edges over Colorado on the power play, penalty kill, Corsi differential, and expected goals. The Blues have been able to withstand their injuries thanks to their offensive depth, along with goalie Jordan Binnington‘s .925 save percentage.