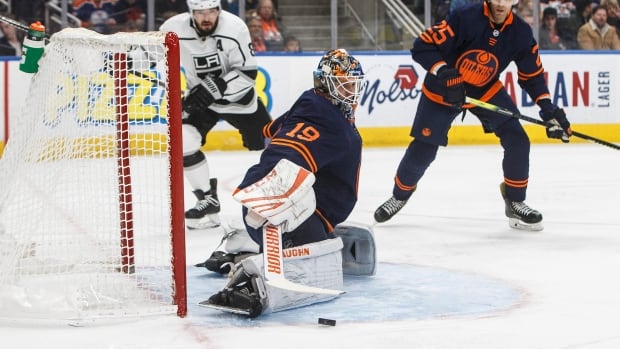 It wasn’t the flashy kind of win the Edmonton Oilers are used to getting with their high-end talent.

Leon Draisaitl and Alex Chiasson each had a goal and an assist as the Oilers moved back into the top spot in the Pacific Division, grinding out a 2-1 victory over the Los Angeles Kings on Friday.

“Mucky, ugly, chip-it, ping-pong hockey. But, we got the two points, so we move on,” said Oilers head coach Dave Tippett. “With our lineup the way it is right now [with injuries] we’re trying to grind out some points and that is what we did tonight.

“We knew we needed a tight hard-checking game just to get us back set in the right direction.”

Mikko Koskinen made 35 saves to backstop the Edmonton Oilers to a 2-1 victory over the LA Kings. 1:39

Koskinen was pulled after allowing three goals on 12 shots in a 5-2 loss to Ottawa the game previous and was happy for the chance to redeem himself.

“It shows that the coaches are trusting me and giving me a chance to go back there after one bad game,” he said. “It’s always good to shake that off right away.”

Michael Amadio replied for the Kings (11-17-2), who have lost three straight games and 10 in a row on the road.

“It’s frustrating to lose this game,” said Kings forward Blake Lizotte. “I thought we were good basically all three periods and they scored two power-play goals, which they’ve done all year.

“We have chances, we put pucks to the net and unfortunately they didn’t fall for us. That’s been the case lately.”

Edmonton’s top-ranked power play got the Oilers on the board 11 minutes into the first period as Draisiatl’s attempt to pass through traffic deflected off of defender Drew Doughty’s leg and past Kings goalie Jonathan Quick. It was Draisaitl’s 19th goal of the season.

Rob Pizzo looks at 9 sons who took the term “following in your father’s footsteps” to a whole new level.  2:07

Los Angeles looked to have tied the game with six minutes left in the opening period on a goal by Lizotte, but it was called back on an off-side call by video review.

The Oilers got another power-play tally a minute after that as Connor McDavid made a great feed through to Chiasson, who had an easy tap-in into a wide-open net.

After a scoreless second period and several heroic saves by Koskinen, the Kings got back into the game with 6:28 to play in the third period when a puck was loose in the crease before Amadio was able to jam it into the net to make it 2-1.

There was some frantic play in the dying minutes, but Edmonton was able to hang on.

The Kings are right back at it on Saturday as they head to Calgary to face the Flames, while the Oilers play the third game of a four-game homestand on Sunday against the Buffalo Sabres.