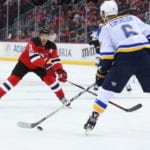 Darren Haynes of The Athletic:  The Calgary Flames have several reasons to pursue Hall and several not to. His hometown was nearby for one and Calgary needs a shot of swagger desperately. Hall deepens the lineup and reshapes the core a bit. The big thing is Calgary could have a nice 1-2-3 punch at the center position and allow the depth to thrive.

The problem is though it would be a gut-punch to Edmonton, there are considerable cap implications and a steep price tag with a player of Hall’s caliber. There are injury concerns as well but Calgary makes some sense.

Ryan S. Clark of The Athletic:  What would it take for Colorado to acquire and keep Taylor Hall? For one, Colorado would have to mortgage some assets from its second-ranked farm system. Is Sakic willing to do that? Is he also willing to pay Hall $9-11 million AAV for the long-term?

Finding a way to keep Hall would likely alter the roster while avoiding Hall would help Sakic only have to pay later. Would potentially losing players like Andre Burakovskyor Joonas Donskoi be worth Hall? It’s a good question.

Jeremy Rutherford of The Athletic:  How can St. Louis get into these sweepstakes? Doug Armstrong has coveted Hall for some time but acquiring the forward creates problems. Extending Hall would compound those problems (especially around $10 million AAV).

Bringing in and extending Hall would likely mean no more Alex Pietrangelo and Armstrong would have to part with several assets to boot. There is intrigue to this type of scenario but little logic behind it. That is why Armstrong likely steers clear this time around.

Finally Taylor Hall to the Oilers?

Allan Mitchell of The Athletic:  Again, Ken Holland faces an unexpected dilemma that is good. Could Hall be that piece he needs for Edmonton to have more balanced scoring? How much would that cost? Wouldn’t it go against his master plan? Those are all valid questions.

There would have to be conditions involved with any deal such as lottery protection, etc. The 2020 first-round pick would be in play along with players like Ethan Bearand Kailer Yamamoto for starters. Again, Holland would want to extend Hall and cap-wise, that can work.

The final question is does Edmonton believe they can win now? It’s not unrealistic.