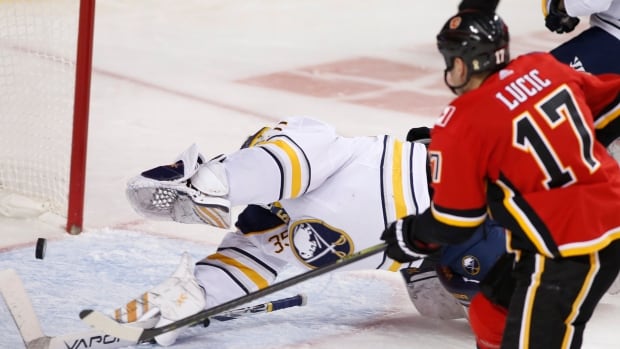 Milan Lucic scored his first goal with Calgary, and it turned into the winner as the Flames held on to beat the Buffalo Sabres 4-3 on Thursday.

The Saddledome erupted at 3:58 of the third when Lucic finished off a passing sequence with Derek Ryan and Dillon Dube for his first goal in 29 games, dating back to last season when he was a member of the Edmonton Oilers. Chants of “Looo” rained down from the crowd as Lucic hugged his linemates in the corner after putting Calgary ahead 4-1.

Tobias Rieder, Johnny Gaudreau and Sean Monahan also scored for Calgary (14-12-4). Monahan also had an assist for his first multi-point game since Nov. 7. The Flames have points in five straight games (4-0-1).

Milan Lucic scored his 1st goal with Calgary in the Flames 4-3 victory over the Buffalo Sabres 0:30

Sam Reinhart, Jake McCabe and Jack Eichel scored for Buffalo (13-11-5), which entered the night with points in its previous four games. Eichel extended his point streak to 11 games (10-10-20).

The goals by McCabe and Eichel came in the last three minutes — Eichel’s coming with the goaltender pulled — to set up a furious finish.

After successfully killing off three straight first-period Sabres power plays, the Flames tied it 1-1 at 16:42, converting their first man-advantage.

Set up by Monahan, Gaudreau strode to the face-off dot and ripped a shot into the top corner for his sixth goal of the season.

Gaudreau, who scored 36 times last season, entered the night without a goal in his last 10 games and with just two in his last 24 games.

Rieder’s short-handed goal at 11:18 of the second broke a 1-1 tie. Sprung on a breakaway by Ryan, Rieder sped in on Ullmark and on a deke, neatly slid the puck through the pads of the Sabres goaltender.

At 15:02, Calgary surged in front 3-1 when Mikael Backlund set up Monahan for a one-timer from a sharp angle. It was the seventh goal of the season for Monahan, who is coming off back-to-back 30-goal seasons.

Gaudreau and Monahan snapped their slumps on a night in which Ward reconfigured his top two lines. Separated to start the game, Ward did reunite the duo, but with a new-look winger in Backlund.

Meanwhile, Elias Lindholm, the other longtime member of Calgary’s top line, shifted to centre and skated between Matthew Tkachuk and Andrew Mangiapane.