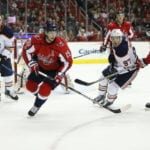 Justin Emerson: Vegas Golden Knights GM Kelly McCrimmon said that the injury to forward Cody Eakin didn’t force them to trade for Capitals forward Chandler Stephenson, they would have done so anyway.

Day-to-day with the salary cap ceiling

Samantha Pell: Washington Capitals GM Brian MacLellan said they are making decisions day-to-day with regards to LTIR, injuries and the salary cap. Stephenson was traded and two were sent to the AHL to activate Carl Hagelin and eventually the return of Backstrom. The Capitals are not alone when it comes to dealing with the cap ceiling.

Samantha Pell of the Washington Post: Washington Capitals pending unrestricted forward Nicklas Backstrom is negotiating his next deal after parting ways with agent Mark Leveine before the season got underway.

“I feel like I’ve been here long enough and I feel like I’ve seen everything, and I don’t think it’s anything to hide,” said Backstrom, who was drafted by the Capitals with the No. 4 pick in 2006 and made his NHL debut in 2007. “We will see what happens here moving forward. We will see what happens. I just believed that I wanted to do this myself. I feel like I have a good enough relationship with the organization that we can be honest and talk, and that is how it is.”

When asked how he thinks he’s doing so far.

“I’m out a contract next year, so I’m not doing that good, I think. We’ll see what happens.” He declined to get into specifics about which members of the front office he is speaking with, but he confirmed talks are happening.

“We’re talking, and we will see what they would like to do,” Backstrom said. “It is in their hands pretty much.”

Goaltender Braden Holtby is also without a contract for next season and has Sergei Bobrovsky (seven-years, $70 million) as a comparable.

Capitals GM Brian MacLellan continues to speak with both players, but it’s going to be hard to fit both in,