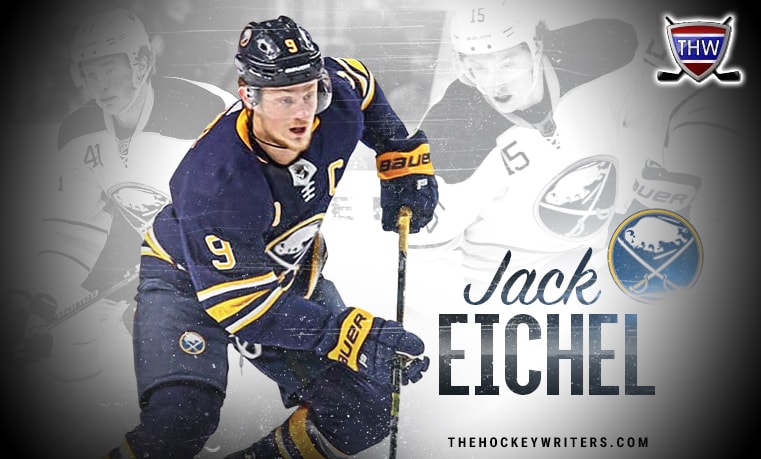 It takes more than the arrival of a so-called “once-in-a-generation” star to transform a losing team into a contender. Hockey is a team sport; one skater can only do so much.

Buffalo Sabres center Jack Eichel is trying to do it all. In a home-and-home set against the Toronto Maple Leafs last weekend, he played some of the best hockey of his young career. He scored two goals, assisted on two others and was a plus-five. In the first game, he fired a game-high eight shots.

It wasn’t just his offense that was
noticeable–though he dominated the game nearly every time he took the ice. He
was physical, strong on the puck, and was a disruptive defensive force.

“He’s a dynamic leader. Not only in the way he’s
communicating right now, but also the way he’s playing,” said
Sabres head coach Ralph Krueger. “You might have
been excited for his goals. I was most excited about his last couple of minutes
and how he came to play without the puck and how hard he defended when they
pulled the goalie out. He did put one in the empty net, but it was the work he
did before that, I think, that showed that Jack is maturing right in front of
our eyes.”

When his confidence is going, Eichel makes hockey look easy. He plays a more complete game–offensively, on defense and at the faceoff dot. It appears he’s putting in the effort to improve the little details of his game.

Eichel is a dynamic force, lighting it up most nights. He’s pushing the pace, using his skating ability to enter the zone with speed and attacking the net. “Every day is fun coaching Jack Eichel,” said Krueger with a grin.

When Eichel scored Monday night in the Sabres 7-1 win over the New Jersey Devils, he extended his point streak to 10 games (9 goals and 10 assists). He now owns the eighth-longest streak in the NHL this season and trails only Patrick Kane for the longest active streak.

His one-goal, two-assist night marked the seventh
three-point night this season, already besting his previous career-high set in
the 2016-17 season. Entering play Tuesday, only Leon Draisaitl (8) and Connor
McDavid (8) have more games with at least three points this season.

For the number-crunching crowd, after Monday night’s game, Eichel had fired 136 shots, with 10.10 expected goals, a 16.35 shooting percentage and his average shot distance is just under 33 feet.

The fiery and competitive Eichel has been the only consistent force driving the Sabres offense this season. Of the Sabres’ 85 goals, he has 38 points. That means he’s had his stick in on 45 percent or nearly half of the team’s goals scored. Let that sink in. Half.

Eichel’s four-goal performance against the Ottawa Senators on Nov. 16 was an example of how Eichel can take charge of a game and lift his team to victory. From the first shift he was determined. Nothing short of victory was going to be acceptable.

The No. 2 overall pick in 2015 has improved year-over-year
since he came into the NHL. Last season he set career highs with 28 goals and
82 points.

After Monday night’s games, at even-strength, Eichel is tied for third in the league in goals (13), tied for eighth in assists (14) and fifth in points (27). He’s also tied with Brady Tkachuk and Dylan Larkin for the league lead (16) for penalties drawn.

Through his first four seasons, Eichel has scored on roughly 10 percent of his shots taken. This season, he’s hovering around 16 percent–a big jump. Several reasons contribute to this. First, the quality of his shot chances have improved. As a result of his increasing drive and confidence, he’s cutting toward the middle and driving the net more than in previous seasons, something he noted when watching video of several current great players. He’s also taking shots closer to the goal, which have a better chance at getting on net without being deflected or blocked.

Eichel averaged just under three shots-per-game in his rookie year (2.9). He’s since shot the puck a whole lot more.

Through his first three seasons, Eichel won only
40.5 percent of his faceoffs at even strength. That said, he has improved
dramatically since then. The Sabres captain is nearing an even split in the
faceoff circle, winning 47.4 percent of his draws.

Eichel Winning at the Dot

Eichel is crushing it at home. He’s second in the
league with 26 of his 38 points on home ice. McDavid, the only player chosen
before him at the 2015 NHL Entry Draft, is leading the way with 29 points at
home. Conversely, he’s “merely” a point-per-game player on the road, putting up
12 points in 14 games away from KeyBank Center.

Like any player, Eichel has his defensive lapses.
The two goals scored by 18-year-old Chicago Blackhawk Kirby Dach on Nov. 17 are
prime examples of that. But they are now the exception. A few years ago, there
were shifts when Eichel would be caught gliding back to his zone or not backchecking
with determination. Now it happens so rarely that we can pinpoint the few
individual times.

John Madden, a 13-season veteran with three
Stanley Cups on his resume, noted Eichel’s lapses on the NHL Network last
month. Noting his five goals in two games he said, “It’s like eating cheesecake and then going and working out.”

Eichel’s hustle was on full display against the Maple Leafs. In addition to making a diving backcheck to thwart John Tavares in the first period, on another play the frizzy-haired phenom turned Leafs blueliner Jake Muzzin into a pretzel. He easily won a physical battle against Muzzin, then spun away and set up his linemate Victor Olofsson who sniped his 10th goal of the season.

“His skating and puck protection are
world-class,” Vesey said. “It’s fun to watch.”

Eichel hasn’t just sparked the Sabres with goals, he’s tried to do so using his fists. In a frustrating loss at home to the hapless Minnesota Wild in November, Eichel dropped his gloves and went after Wild forward Joel Eriksson Ek.

It wasn’t so much the fight, which didn’t even earn him his first fighting major, but the fact that he took matters into his own hands. Literally.

“What Jack did there was a sign of leadership, a
sign of passion and a willingness to change this,” said
coach Ralph Krueger. “We have to get that right through our lineup
and everybody just build on that.”

Eichel has yet to play in the postseason. If the Sabres hope to make a big playoff push, he will need to continue to be at the top of his game.  “You see what he’s feeling and he wants to win,” said Montour about Eichel.

His peers know Eichel is a force who needs to be isolated. “He’s an elite player. His ability to use his reach, his size, his speed, his strength,” said John Tavares, captain of the Maple Leafs.

“He’s been playing insanely well for quite a
bit now,” said fellow Bostonian
Jimmy Vesey.
“When he wants to go, not many people are catching him and when he hangs on to
the puck, he does it as good as anyone.”

Not too long ago, Eichel was an 18-year-old kid beginning his NHL career. He was carrying the weight of being the No. 2 overall pick for a franchise that had experienced two-straight, last-place finishes.

After four seasons as an emerging NHL star,
Eichel is finally meeting superstar expectations. He’s embraced the
responsibilities that come with being a captain and the face of an
organization. More importantly, he’s become the superstar the Sabres thought
that they had drafted.