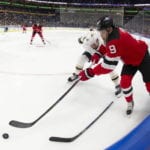 The Devils have let it be known that they want first-round draft picks and/or high-end prospects who are NHL ready. They are open to putting re-signing and/or playoff conditions on a deal.

The Devils need defensemen. The Colorado Avalanche would be a good trade partner. Some teams feel the Arizona Coyotes would make a serious offer. The Dallas Stars and St. Louis Blues would be among the interested teams. The Edmonton Oilers would be interested by may not be willing to give up the assets that the Devils would want.

Dan Rosen of NHL.com: Taylor Hall said again that he’s leaving any short- or long-term talk to his agent and GM Ray Shero with regards to contract negotiations or trade talk. Coach John Hynes being fired doesn’t change anything.

Hall said he’s “all in” for interim coach Alain Nasreddine and added the coaching change shocked him.

Devils Red Alert: Elliotte Friedman said on the NHL Network that teams are inquiring about Taylor Hall and that there are “serious talks” going on.

Friedman also mentioned that other Devils players are “out there,” with Miles Wood as one possibility.

Emily Kaplan of Greg Wyshynski of ESPN: Looking at what the firing of New Jersey Devils head coach John Hynes, the hiring of interim coach Alain Nasreddine and what it may mean for the Taylor Hall situation.

Kaplan believed before the firing of Hynes that Taylor Hall would be traded before the February 24th NHL trade deadline, and still believes the same after his firing.

The Devils are not in a position to lose Hall for nothing on July 1st. Signs are pointing to him wanting to play somewhere else.

Before the season started, Hall said that the Stanley Cup was the biggest priority for him over almost everything else.

“I think that’s probably the highest priority,” Hall said. “Lifestyle-wise, I’m not married or anything. I don’t have kids. I’m not really at a point in my career where location matters to me, if I want to be on the West Coast or East Coast or anything like that. You can make any city great if you’re playing well and you’re winning there. So that’s basically my priority.”