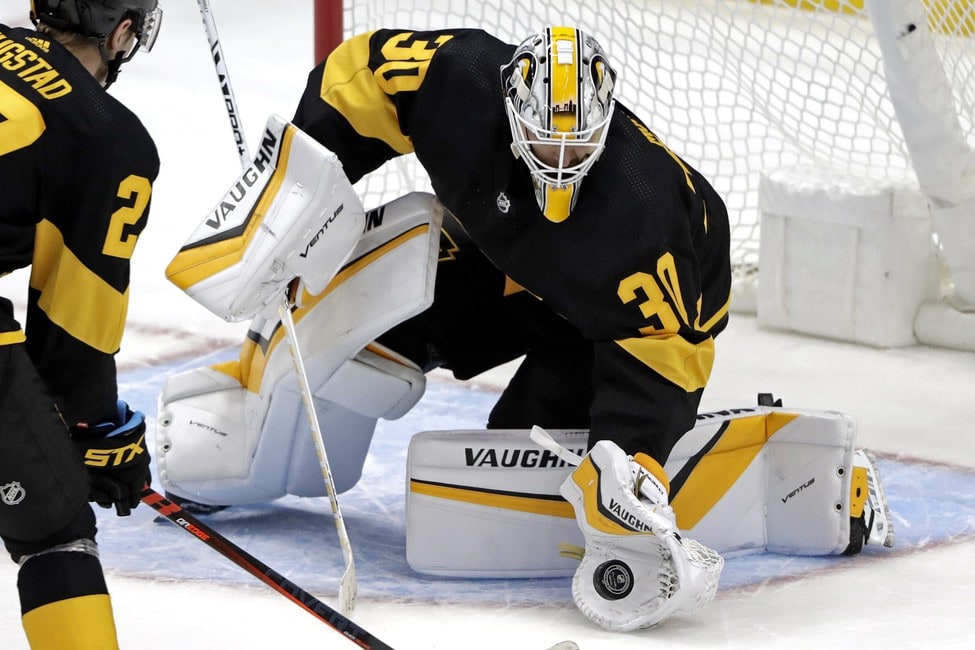 It’s Monday and that means we are going to look back at the
week that was in National Hockey League goaltending. There is a new netminder
looking for playing time Motown, plus we look at who has been hot and who has
been struggling as well as our top-performing backup.

The Detroit Red Wings are in need of some goaltending help.
Veteran Jimmy Howard left with an injury earlier this week and is dealing with
a soft-tissue injury. The Red Wings recalled
called Calvin Pickard from the Grand Rapids Griffins of the American Hockey
League, but he allowed six goals in his start versus the Philadelphia Flyers on
Friday.

The following day the Red Wings acquired goaltender Eric Comrie from the Arizona Coyotes in exchange for defenseman Vili Saarijarvi. Comrie made the jump right to the NHL and took part in Monday’s morning skate. Pickard was reassigned to the AHL.

The addition of Comrie could pay off both immediately and
down the road. The Red Wings have lost nine games in a row, so you’d have to
believe Comrie will get a look at some point, especially when you consider he
would have to clear waivers in order to be sent down to Grand Rapids. He was
already claimed on waivers once this season when the Winnipeg Jets tried to get
him through, so that may not be a risk the Red Wings are willing to take.

The 24-year-old Comrie was originally drafted in the second round of the 2013 NHL Entry Draft by the Jets. He has made five NHL appearances in his career where he posted a 4.21 goals-against average (GAA) and a .870 save percentage (SV%). He has played well in the AHL since being drafted. He is 81-83-20 with a 2.88 GAA, .910 SV% and eight shutouts in 187 games with the St. John’s IceCaps, Manitoba Moose and Tucson Roadrunners.

As general manager Steve Yzerman tries to get the Red Wings
back into contention, Comrie gives him an option between the pipes. Howard is
in the final year of his contract and Jonathan Bernier is not a long-term
solution. With top prospect Filip Larsson struggling in his first AHL season,
Comrie gives the Red Wings a viable, young option at the position.

The Week in Review

What a difference a month makes. October was brutal for the
San Jose Sharks who were down at the bottom of the Pacific Division standings
and many were wondering if it was time for a coaching change. Since dropping
their first two games of November, they have gone 11-2-0 and are back in a playoff
spot.

He has been huge in his last fours starts beating the Los Angeles
Kings twice as well as picking up wins over the New York Islanders and Coyotes.
He gave up just seven goals on 121 shots, in those four games, for a .942 SV%.

The Pittsburgh Penguins have been a rather remarkable story this season. They have had to deal with a ton of injuries to some of their most important players like Sidney Crosby, Kris Letang and Evgeni Malkin. Despite all the man-games lost over the first two months of the season, the Penguins are currently in the second wild-card spot in the Eastern Conference.

Goaltending has been an issue of late in Pittsburgh as they have given 16 goals over their past three games. Matt Murray has really been fighting it in his last few starts and his overall .897 SV% shows that.

Murray’s play of late should open up the door for Tristan
Jerry to get more playing time. He has a 2.27 GAA and .929 SV% in his nine
games this season.

Backup of the Week

The Boston Bruins are sitting on top of the NHL with 43
points and they have been able to do so because of a deep lineup that includes
a pair of very good goaltenders. Tuukka Rask gets most of the headlines in
Boston, but Jaroslav Halak has been very good in his limited time as well.

The Bruins played four games last week and they split the starts between Rask and Halak. The 34-year-old Slovakian-born netminder won both of his starts. On Tuesday, Halak made 36 saves in an 8-1 beating of the Montreal Canadiens. He followed that up with a 26 save performance in a 3-2 overtime win over the New York Rangers on Friday afternoon.

Halak’s play gives head coach Bruce Cassidy a trustworthy backup to give Rask plenty of rest down the stretch so he is fresh for the Stanley Cup playoffs. In his 10 starts this season, Halak is 6-1-3 with a 2.35 GAA and .930 SV%.