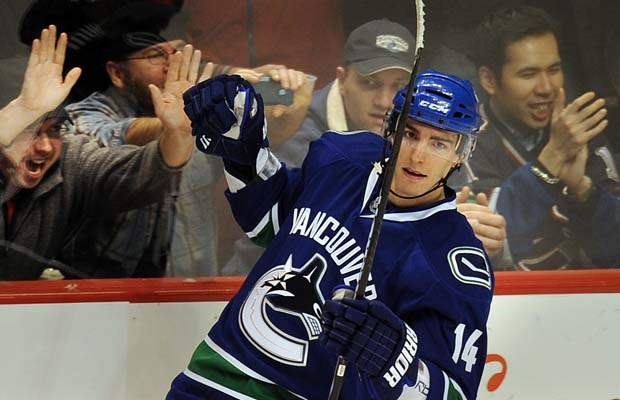 With Alex Burrows entering the Ring of Honour on Tuesday against the Ottawa Senators, it’s a great time to look back at his career with the Vancouver Canucks. It was probably one of the most inspiring and unique careers of all-time. Undrafted and expected to just be at most a veteran presence in the American Hockey League, he proved everyone wrong and became a very effective and successful two-way forward in the National Hockey League.

I was looking for a replacement for Jimmy Roy…I thought Alex at some point would be able to replace Jimmy. He did that and then some. He has taken advantage of every opportunity that’s been given to him.

By the end of his career he had put up 409 points (205 goals, 204 assists) in 913 games. Not many people would have predicted those numbers when he started in the NHL. His first three seasons only saw him score 22 goals and play primarily a bottom-six role.

That all changed when then-coach Alain Vigneault put him on the top line with Daniel and Henrik Sedin. Canucks fans and analysts alike were confused at the move, wondering what a bottom-six forward was doing with two of the best players in the game. But it turned out that Burrows was the perfect fit for the twins.

The rest, as they say, is history. Burrows went on to have four of his best seasons alongside the Sedin twins. Over that time he accumulated 218 points (117 goals, 101 assists) all while showing off his speed, tenacity, hockey IQ and agitating qualities. He created so many memorable moments in a Canucks jersey that it was hard to narrow it down to five. He is and always will be a legend and worthy of his spot in the Ring of Honour. With all that said, let’s start the countdown!

Burrows was a hero for the Canucks many times in his career. Two come to mind in the form of breaking a losing streak for his own team and breaking a winning streak for the opposing team. His first came in a game against the Carolina Hurricanes in the midst of a potentially debilitating nine-game home losing streak during the 2008-09 season.

After Ryan Kesler chipped the puck ahead to give him a breakaway, he finished off his signature backhand-forehand move to give the Canucks a 4-3 lead with less than two minutes left. That game started a 12-4 run that helped propel them to a playoff spot and ultimately a second-round exit at the hands of the Chicago Blackhawks. If not for that heroic act, the streak may have continued.

The second streak breaker happened three years later against the Detroit Red Wings. During an unprecedented 23-game home winning streak, the Canucks came into Joe Louis Arena looking to potentially break it. The odds were stacked against them as the Red Wings were nearly unbeatable at home at that time. But Burrows, as always, was up to the challenge. With the game tied 3-3, he stepped up with the shootout winner using his patented backhand-forehand move.

After the goal, he used the same celebration he used three years prior, the breaking of the stick over his knee, symbolizing breaking the streak. Burrows has quite the personality, and he once again showed it off in dramatic fashion.

This moment is an emotional one for many people, as it reminds us of a player and a person whose life was cut short. Luc Bourdon was a very well-liked and promising prospect for the Canucks before a tragic motorcycle accident took him in 2008. To keep his memory alive, Burrows began a goal-scoring celebration that he debuted after scoring the series-winning goal against the St. Louis Blues in the 2009 playoffs. He did it a few more times in his career, always after big goals.

The celebration of shooting an imaginary arrow into the stands was a favored one by the late Bourdon. Burrows did it as a tribute to his friend and teammate, shooting the arrow into the heavens, basically dedicating the goal to him.

The 2010-11 season was a milestone one for many players on the Canucks. Burrows added to the fun with a rare feat, back-to-back hat tricks. Part of a 35 goal campaign and many other memorable moments, he scored six goals in a matter of two days. It started against the Columbus Blue Jackets and ended against the Arizona Coyotes.

In the first game against the Blue Jackets, he scored two of his goals from backhand passes by the Sedins, which was the case with many of his goals. His third one was scored short-handed, which he did 17 times in his career. The hat trick was the second of his career, but his first official one, because the first one had a phantom goal a part of it. If you look closer at the first one, his third goal was actually Ryan Kesler’s, but I digress.

Then less than 48 hours later, the hats rained down again at GM Place. This time it was against the Coyotes. All three goals were assisted by Henrik and Daniel Sedin and all showed off Burrows’ hockey IQ. He just knew what to do when they had the puck which was to basically find open ice with his stick down. If you look at most of his goals, they are scored within five feet of the net.

With the back-to-back hat tricks, he joined an exclusive club filled with only three other players, Eric Lindros, Wayne Gretzky, and Alex Ovechkin. Definitely not a bad trio to be mentioned alongside.

I’m sure every Canucks fan chooses to forget every second after this Burrows moment. But at the time, it was the height of excitement for the city of Vancouver. After dispatching the San Jose Sharks with a lucky goal off the stanchion to get to the Stanely Cup Final for the first time since 1994, Burrows scored another heroic goal to put his team up 2-0 in the series.

Using his speed and tenacity, it was vintage Burrows. After a turnover at center ice, he was sent in alone on then-Bruins goaltender Tim Thomas. After faking the shot and getting him out of position, he outworked 6-foot-9 Zdeno Chara to score his second overtime winner of the 2011 playoffs.

You knew this was coming, the number one Burrows moment is, of course, the goal that slayed the dragon that was the Chicago Blackhawks. After two postseasons of futility, the Canucks were finally on the brink of exorcising the demons of the past. But Jonathan Toews and the Blackhawks had other ideas.

After going up 3-0 in the first-round series, Raffi Torres lowered the boom on defenceman Brent Seabrook injuring him in the process. The Blackhawks used the injury to their star defenceman as motivation to come all the way back to tie the series. That set up a very unlikely game seven showdown at Rogers Arena.

Vigneault got desperate and reunited Burrows with Kesler in order to try and light a fire under the team. The move paid immediate dividends as he scored the opening goal of the game in a familiar location, right beside the net. The goal stood as the game-winner until the third period when Toews scored shorthanded in the final two minutes. As most fans know, the Canucks never do things the easy way. Sudden death overtime was of course in the cards for this game.

Stomachs were probably in knots for the 15 minute intermission, I know mine definitely was. After Toews tied it, I’m sure many fans were already having nightmares of the Blackhawks eliminating the Canucks once again. But Burrows had other ideas.

To quote Jim Hughson, it was a wonderful day for an exorcism, and finally, the slaying of the dragon was complete. Of course, it was Burrows, one of the biggest clutch performers the Canucks have ever had. That goal ended up being just the first of many in the 2011 playoffs. Too bad he couldn’t have done it just one more time in the Stanley Cup Finals, but I guess it just wasn’t meant to be.

Even though the Cup wasn’t won in 2011, Burrows gave us many memorable moments that we all still remember to this day. That’s a gift that will just keep on giving. Even eight years later, I still remember the feeling I had after he scored that goal. It will go down as one of the biggest goals in Canucks history. No doubt we will be telling our grandchildren about it.

Related: The Most Memorable Goals from Alex Burrows

That completes the top five Burrows moments in a Canucks uniform. There were many other moments throughout his career that could have made this list, but these were definitely the most memorable.

I followed Burrows from the moment he was signed by the Manitoba Moose (Canucks’ AHL affiliate club at the time) to the day he retired from the NHL. I continue to follow his coaching career with the Laval Rocket as well. I saw something in him before he was even signed by the Canucks. I just knew he would be an NHL forward one day.

Granted, I never anticipated the career Burrows ended up having, but I knew he would be successful. The smarts, tenacity and work ethic he displayed early on in his professional career just screamed NHL. Even when he was put with the Sedins I didn’t think the worst. I really thought he was going to thrive with them, and boy did he thrive. I may sound like a fanboy here, but he will go down as one of the greats in Canucks history.

So, congratulations Burrows you deserve all the love and standing ovations you get on Tuesday as we look back and honour your contributions to the Canucks. Welcome to the Ring of Honour!

Since announcing team name, the Seattle Kraken’s business is soaring
4 Takeaways from Stars’ Second Round-Robin Game
It’s time for Matthew Tkachuk to get back to scoring if Flames hope to beat Jets
Crosby catches Gilmour and Sakic in Penguins’ Game 2 win over Canadiens
Golden Knights Outshoot and Outwork Blues in Round Robin