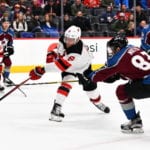 Pierre LeBrun of The Athletic: The New Jersey Devils and Taylor Hall‘s agent Darren Ferris have been in constant contact.

Reported yesterday morning that sources are saying the Devils are listening to trade offers for the pending UFA. They have to listen to offers in case they are aren’t able to re-sign him. Devils GM Ray Shero wouldn’t confirm on the weekend if any trade talks have started.

Shero did confirm that Hall hasn’t asked for a trade.

Retaining a portion of Hall’s $6 million salary would also increase his trade value.

ESPN’s Greg Wyshynski noted the Devils have been scouting the Colorado Avalanche this season, with Ryan Clark confirming the Devils have scouted the Avs and their AHL affiliate.

Would the inconsistant Calgary Flames be interested in acquiring if Hall would sign an extension in his hometown?

The Montreal Canadiens have the cap space and assets. hasn’t heard if they are interested or not. The Canadiens are a bubble team and may not be interested in giving up assets now.

Edmonton Oilers GM Ken Holland may be reluctant to part with a first-round pick at this stage. A July 1st signing may be of more interest for the Oilers.

The Boston Bruins don’t have salary cap room and would have to get creative.

The San Jose Sharks like to make big moves but are without a 2020 first-round pick.

On the Oilers acquiring Hall

Dustin Nielson: Don’t see why the Edmonton Oilers are being speculated as a potential front-runner to acquire Taylor Hall.

It makes zero sense at this time for the Oilers to waste future assets at acquire him.

Believe that the Oilers would be better off spending their money elsewhere this offseason than giving a Hall a large, long-term deal.

On the Oilers trading their first-round pick