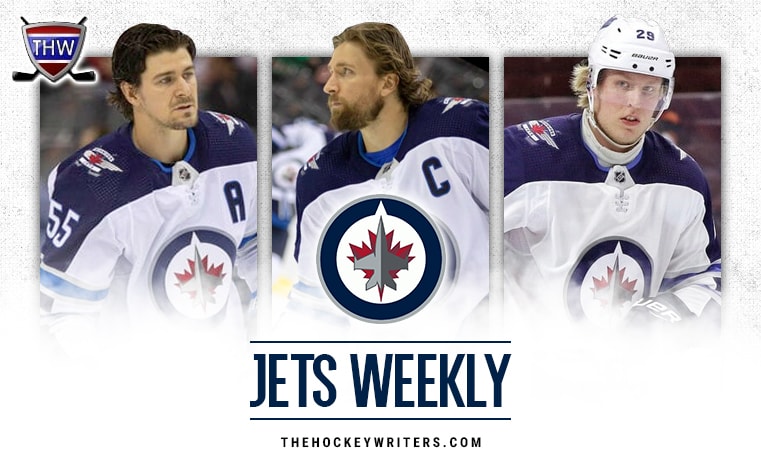 Welcome to Winnipeg Jets Weekly, where you can catch up on the past week of Jets hockey. From hot topics to news and notes, this is where you can find all things Jets related throughout the 2019-20 season.

The Jets kept their hot month of November going this past week, winning two out of three games on their California road trip. The team has travelled all over the map this past month playing nine of their 14 games away from Bell MTS Place, including two separate trips to the west coast.

This past week started with the team playing in San Jose against the Sharks for the second time this month. The Jets won 5-1 in dominating fashion – their largest victory of the season thus far. They got goals from five different players in the win and the power play went 1-for-3.

The Jets followed that up with a 3-0 win in Anaheim against the Ducks and the power play struck again, going 1-for-4. It was more of a defensive battle with just 44 total shots in the game combined from the two teams (20 for the Jets and 24 for the Ducks). Goaltender Connor Hellebuyck was in fine form again, picking up his second shutout of the season.

The lone blemish of the week came in the team’s final game
of their road trip against the Los Angeles Kings in which they lost 2-1. The
Jets tried to fight back from a rough first period in which they gave up both goals
and were outshot 19-6 but they could only muster up one third period goal from
forward Jack Roslovic.

Hellebuyck has kept his Vezina Trophy-like numbers alive for yet another week. As I mentioned, he grabbed his second shutout of the season against the Ducks and he stopped 32 of 33 shots against versus the Sharks on Nov. 27.

Hellebuyck is now 13-7-1 on the season with 2.23 goals against average and a .933 save percentage (SV%). His 13 wins are currently tied for the most in the National Hockey League. His save percentage is currently second-best behind Arizona Coyotes’ goaltender Darcy Kuemper who sits with a .935 SV%.

Hellebuyck has faced the third-most shots in the league (657) while playing the seventh most minutes (1,185:56). His two shutouts are currently tied for second-most in the league and he only had two shutouts all of last season. There is no doubt if he keeps these numbers up he will be one of the finalists for the Vezina Trophy and he could very well win it.

Jets’ defenseman Dmitry Kulikov left Friday’s game against
the Ducks with what is being called an upper-body injury after taking a big hit
from Ducks’ forward Carter Rowney. Kulikov played 3:59 of ice time before the
injury and did not suit up in the teams’ game against the Kings on Saturday. He
is expected to be re-evaluated when the team returns back to Winnipeg.

The Jets recalled Manitoba Moose defenseman Cam Schilling on Saturday in response to Kulikov’s injury. He did not see game action as head coach Paul Maurice inserted defenseman Carl Dahlstrom instead. Dahlstrom played 10:35 of ice time on Saturday, finishing minus-one and registering one shot on goal.

That was Dalhstrom’s first game back with the Jets since he
last played on Oct. 29 against the Ducks. As for Schilling, he has yet to suit
up for the Jets this season. He has registered 11 points in 22 games with the
Moose in the American Hockey League and he boasts a strong plus-10 thus far on
the season.

After a rocky month of October, the Jets have settled things down and played some much better hockey over the last four weeks. They finished the month of November with a 10-3-1 record – good for seventh-best in the NHL – compared to the 6-7 record they posted in October.

The Jets went 11-4 in December last season and will hope to
get a repeat of something similar this time around as they have 13 games lined
up over the next month.

A Look at
the Week Ahead

The Jets have three games on tap next week with two of them being played at Bell MTS Place where the team sits with a 6-5-1 record on the season thus far. If we look even further ahead, eight of the team’s 13 games in the month of December are home games and seven of the 13 are against Central Division opponents.

The Jets start next week with two games against the Dallas Stars on Tuesday and Thursday and they finish it off against the Ducks on Sunday afternoon. The lone road game comes Thursday when the team travels to Dallas for the second time this season.

The Jets are currently 1-1 against the Stars and Ducks on the season – playing each team once at home and once on the road. This will be the final time the Jets play the Ducks in the 2019-20 regular season and they will not meet with the Stars again until March 2020.

Thank you for reading this week’s edition of ‘Jets Weekly’. Stayed tuned for next week’s edition and as always, feel free to leave any feedback or questions you may have in the comment section below, or follow me on Twitter @Goet91.