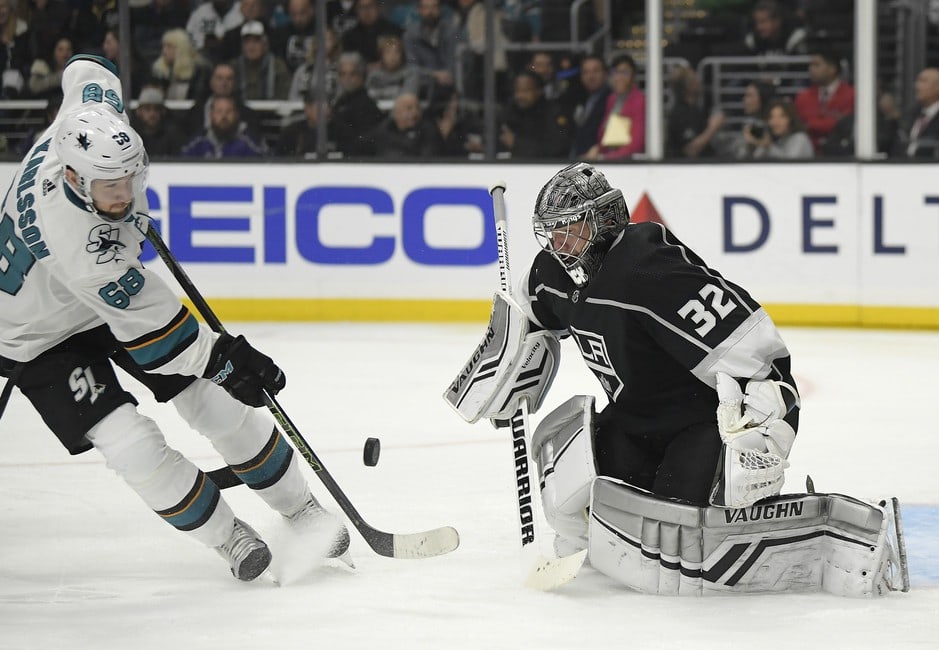 The Sharks entered Monday’s contest winning eight out of their last nine games, which included back-to-back overtime victories against the Vegas Golden Knights and New York Islanders. They previously held a six-game winning streak that helped them move up in the standings and closer to playoff contention.

As for the Kings, the team carried a five-game winning streak at home until Saturday’s loss against the Arizona Coyotes. However, the team still sits in last place in the Pacific Division and in the Western Conference.

Regardless of where the franchises stand, a physical contest is expected with every matchup. Here’s what to take away from the bout and why this rivalry won’t be dying anytime soon.

This game probably brought back bad memories for San Jose fans. The Sharks didn’t waste any time and jumped out to a three-goal lead at the halfway point in the second period.

Erik Karlsson scored San Jose’s first in the opening period, followed by Timo Meier and the second line being responsible for the other two goals in the second period.

Before the second period concluded, Adrian Kempe scored his third goal of the season and made it 3-1. The Kings kept the momentum in the third and tied the game with goals from Dustin Brown and Anze Kopitar – the first King to reach double digits in scoring.

With three unanswered goals, Los Angeles forced OT. Patrick Marleau eventually clinched the win for the Sharks, but the way the Kings fought back and secured one point did not go unnoticed.

“It was a Jekyll-and-Hyde team,” head coach Todd McLellan told Rosen in a post-game interview. “Some of the things we wanted to do in the game, we started to see them come out in the third period. I thought the power play was outstanding.”

“That’s what a real power play looks like when it’s going well against the best penalty kill in the league, so it gave us a chance to crawl back in, and unfortunately a broken play at the end that cost us a point, but sometimes it goes that way. We can’t control everything.”

The Sharks are now slotted into the second wild card spot. With Monday’s OT winner, Marleau’s 99 game-winning goals with the Sharks is now 3rd-most all-time by one player with one team.

During the third period, Alec Martinez left the game after colliding with Melker Karlsson. It was later reported that he took a skate to the arm and was transported to a hospital for further evaluation.

On Tuesday, the team announced that Martinez “sustained a laceration to his right wrist and was taken to Keck Medicine of USC where he underwent successful surgery to repair a radial artery and two superficial radial nerves.”

Although a timetable on Martinez was not released, he’s expected to make a full recovery. The Michigan native has five points (all assists) and a minus-one rating on the season.

A strange, but noteworthy topic. While the Sharks return to San Jose with two points, the real winner of Monday’s game was McLellan’s attire. The Kings hosted Hockey Fights Cancer night on Saturday against the Coyotes, where all personnel wore purple.

McLellan continued the trend with a retro purple plaid suit and matching tie that caught attention from colleagues on Twitter. Although he didn’t get the win against his former team, this just proves that hockey players and coaches are the best dressed.

Up next for both squads on Wednesday, the Sharks host the Winnipeg Jets while the Kings welcome the New York Islanders. Both teams will face off again on Friday at SAP Center.