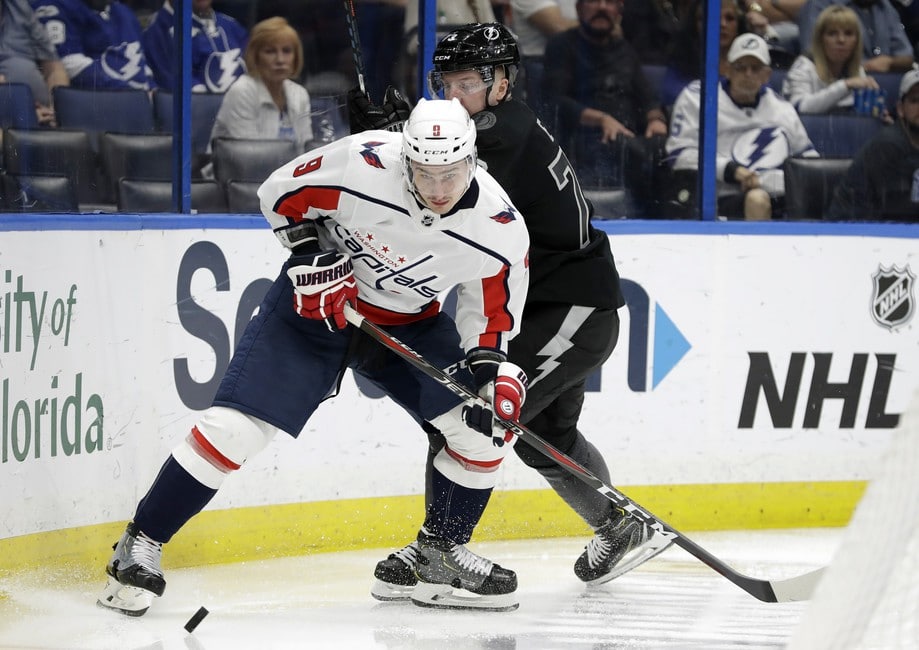 WASHINGTON — Dmitry Orlov scored 3:03 into overtime, and the Washington Capitals rallied to beat the Tampa Bay Lightning 4-3 on Friday.

Orlov, Jakub Vrana and Evgeny Kuznetsov each had a goal and an assist for Washington, which trailed 3-1 after two periods. Alex Ovechkin tied the game with his team-leading 17th goal 11:36 into the third.

The Capitals went 2 for 2 on the power play and closed out a three-game homestand with five points.

Brayden Point scored his 100th career goal and had an assist for Tampa Bay. Nikita Kucherov recorded three assists for the second time this season, but also picked up a penalty that helped set up Ovechkin’s goal.

Mikhail Sergachev and Alex Killorn also scored for the Lightning, who got captain Steven Stamkos back after he missed three games because of a lower-body injury.

Braden Holtby made 27 saves for Washington, and Andrei Vasilevskiy had 31 stops for Tampa Bay.

Just under two minutes into overtime, Ovechkin appeared to have an open look at a winner, but he came up empty.

Orlov then won the game with his second of the season. He got a pass from Kuznetsov at the blue line, faked as if he was trying to pass across the ice to Tom Wilson, and then fired a low shot inside the left post.

Vrana started Washington’s comeback when he beat Vasilevskiy from the right faceoff circle 3:45 into the third. Vrana’s 12th goal got the Capitals within one.

After Kucherov was whistled for a holding minor, Ovechkin took Vrana’s feed inside just beyond the other faceoff circle and rocketed a shot just inside the left post.

Kucherov leads Tampa Bay with 18 assists, one more than Victor Hedman, who picked up his 17th on Point’s opener. … At 23 years and 261 days old, Point becomes the third-youngest Lightning player to reach the 100-goal milestone. … Lightning D Braydon Coburn exited after the second period with a lower-body injury. … To make room for Stamkos, the Lightning reassigned LW Cory Conacher to the minors. … The Capitals scored multiple power-play goals for the first time since Oct. 29 … Holtby has started a season-high six consecutive games.

Capitals: Open a four-game road trip at Detroit on Saturday.