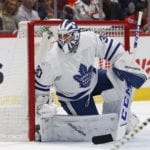 The Maple Leafs like him, they’d love for him to succeed, but it’s just not happening so far. He plays well for a stretch but lets goals in, in bunches.

Maple Leafs GM Kyle Dubas needs to find a backup goaltender, one that is capable and one that comes with a low salary. Teams around the league aren’t going to do the Leafs any favors if they have a goalie the Leafs may covet.

Daniel Nugent-Bowman of The Athletic: If current Edmonton Oilers forward Jesse Puljujarvi is going to play in the NHL this season, he needs to be signed by Sunday at 3:00 PM MT.

Puljujarvi and his agent are still holding firm on wanting a fresh start somewhere else. Puljujarvi wanting to remain in Finland this season makes it harder for the Oilers to trade him.

Pierre LeBrun reported this week that four or five teams have checked in with the Oilers recently.

Oilers GM Ken Holland said he doesn’t have an answer to if Puljujarvi will ever play for the Oilers again. Holland a few days ago on trade talk.

“I would say I had lots of talk with lots of teams in August. It went really quiet in September and October. I’ve talked to a few teams over the last 10 days. That’s where it’s at. If you said today, “Do you think you’ll get a deal done?” I don’t think so. There’s still four days to go.”

Holland when asked given their spot in the standings if he feels more pressure to make a deal now to help their team even more.

“I don’t. I was at it for so long in Detroit. You can’t force anything. I’ve made big trades at the trade deadline and it’s fizzled. And I’ve made little moves or done nothing, and the team has played good. If a deal is there, a deal is there. I know what I’m looking for. So, if a deal’s not there, it’s not there.”