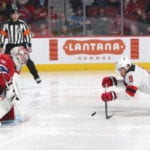 Canadiens may need to make a move … Do they go big?

Stu Cowan of the Montreal Gazette: The Montreal Canadiens are now winless in six .

The Canadiens have just over $8.2 million in salary cap space. Does GM Marc Bergevin look to make a move involving prospects to give the Canadiens a better chance? If not, it may end up being time to start thinking about moving Carey Price and Shea Weber for futures and start a rebuild.

Igor Eronko: Canadiens GM Bergevin is scheduled to be in Moscow to meet with Alexander Romanov on Saturday or Sunday.

Shawn Simpson: Montreal is a market that is needing some star power.

The Canadiens acquiring Taylor Hall with a contract extension makes sense, but it would likely start with prospect Cole Caufield and a first-round pick.

“Specific to Montreal, here’s the thing that I’m going to watch most closely until the trade deadline — or until a trade happens — Taylor Hall,” Dreger said Wednesday on Toronto’s TSN 1050 OverDrive radio show. “I think that Taylor Hall would be a good add for the Montreal Canadiens. I don’t understand why they wouldn’t have interest and I’m not so sure, that given the opportunity, Taylor Hall wouldn’t sign in with the Montreal Canadiens.”

The 28-year old Hall is a pending UFA with a $6 million salary cap hit.

Hall’s agent Darren Ferris has spoken with New Jersey Devils GM Ray Shero about the possible parameters of a deal but there hasn’t been a solid number or term brought up. Agents usually look to wait as long as possible with big named free agents to get the most out of a deal.

“I look at New New Jersey as a hockey market that matters, it does,” Dreger added. “The history certainly would back that up. But I don’t think that Taylor Hall is at all concerned about some of the scrutiny and the pressure and all that of playing in a Canadian market. He did it, he faced it in Edmonton. I think he’s one of those players — not unlike (John) Tavares signing with the (Toronto) Maple Leafs, who would love it. I think he’d feed off the passion. So we’ll see if they can get something done.”