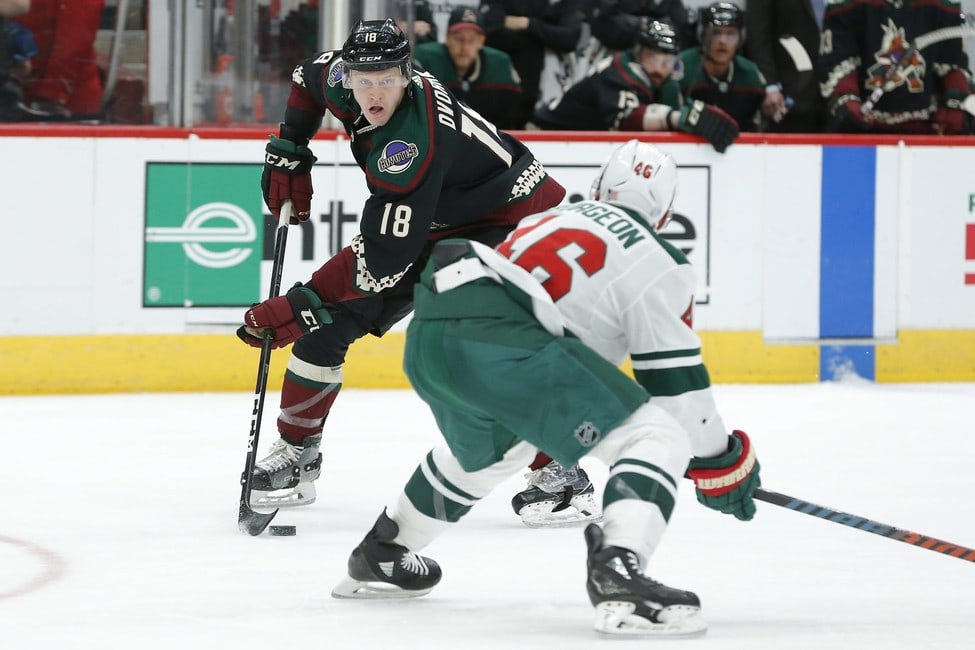 From all of us at The Hockey Writers, we hope everyone out there enjoyed a very happy Thanksgiving with their friends and families on Thursday.

So far in 2019-20, the Arizona Coyotes have had a lot to be thankful for – their outstanding goaltending and defense has led the way to a 15-8-3 start through Thanksgiving, marking the first time since the 2013-14 season that the Coyotes had 15 wins by the fourth Thursday in November.

Fresh off of back-to-back 3-0 shutout victories, the Coyotes got their week started on Thursday, Nov. 21, when Scottsdale native Auston Matthews and the Toronto Maple Leafs came to town. The organization had fired head coach Mike Babcock on Wednesday and replaced him with Toronto Marlies’ bench boss Sheldon Keefe, so the Coyotes got the Maple Leafs’ best effort on Thursday night with Keefe behind the bench. Tyson Barrie scored with less than a minute remaining in the opening period, Pierre Engvall added a shorthanded marker late in the second, and Auston Matthews added the cherry on top in the third frame as Toronto rolled to an easy 3-1 victory in Glendale.

From there, the Coyotes headed west to the Staples Center to take on the Los Angeles Kings for the second time in six days. After pitching a shutout against Todd McLellan’s group on Monday, Antti Raanta again got the start on Saturday afternoon, and, again, he stood on his head and frustrated the Kings. Phil Kessel, Lawson Crouse, and Christian Fischer all scored for Arizona, and Raanta made 43 saves on 45 shots as the Coyotes narrowly escaped from Southern California with a 3-2 triumph.

The Coyotes then returned back home to Glendale for a two-game homestand starting on Sunday evening against Dave Tippett and the Edmonton Oilers. The club welcomed Tippett, who coached the Coyotes from 2009 to 2017, back to Gila River Arena with a nice intermission tribute video. Tippett was at the helm for the franchise’s greatest triumph in 2011-12, so he’ll always be held with high regard in the Valley of the Sun.

On the ice, it didn’t take long for Connor McDavid and Leon Draisaitl to strike – with Nick Schmaltz in the box serving a penalty for too many men, McDavid and Draisaitl picked up assists on James Neal’s first-period power-play goal at 2:05, which came just 24 seconds into the minor penalty. The Coyotes then scored three of the game’s next four goals and held a 3-2 lead after 40 minutes, but Markus Granlund won a battle against Jordan Oesterle and Ilya Lyubushkin late in the third and scored the tying goal. In overtime, McDavid and Draisaitl were both on the ice for four minutes, but they could not score on Darcy Kuemper, and the game headed to the shootout, where McDavid did beat Kuemper for the only goal to give Edmonton a 4-3 win.

The Coyotes and Oilers have played twice this season, and Arizona has held McDavid (1-1-2) and Draisaitl (0-2-2) to just four total points during those contests. It seems like Rick Tocchet and his staff have figured out a formula to slow down the NHL’s two most prolific scorers, but, if these teams happen to meet in the playoffs, Arizona needs to do a better job against Edmonton’s depth scorers – they were burned by Gaetan Haas late in the third period in Edmonton on Nov. 4, and surrendered goals to Alex Chiasson and Markus Granlund in Glendale on Sunday.

Arizona then closed out their week on Wednesday evening with a visit from the Anaheim Ducks. Christian Dvorak scored twice in the first period to give the Coyotes a 2-1 lead after 20 minutes, but Anaheim’s young guns took over from there – 21-year-old Sam Steel tied the game in the second period, and 22-year-old Troy Terry (of 2017 World Junior Championships fame) scored at exactly 10:00 of the third period to give the Ducks the lead.

It didn’t take the Coyotes long to respond, though – Alex Goligoski fired a slapshot that deflected off of the rear end of Anaheim defenseman Hampus Lindholm and past goaltender John Gibson to tie the game only 38 seconds later. The game headed to overtime and, eventually, to a shootout, where Dvorak scored the winner to give Arizona the 4-3 win in their last game before Thanksgiving.

After enjoying American Thanksgiving on Thursday, the Coyotes will be back in action on Friday afternoon in Sin City when they’ll travel to take on the Vegas Golden Knights at T-Mobile Arena. The Golden Knights have been one of the league’s better home teams since starting play in 2017, but the Coyotes have won three straight at “the Fortress” – can they keep the streak alive in this one? Puck drop is scheduled for 3:00 P.M. local time on the Strip (4:00 P.M. in Arizona).

Following their business trip to Vegas, the Coyotes will return to the Valley of the Sun for a home game against the San Jose Sharks on Saturday night. The Sharks have been playing some good hockey as of late – they’ve won 9 of their last 11 and have climbed back into contention after an absolutely brutal start. Arizona will need to be sharp in this one, which will begin at 6:00 P.M. in Glendale.

The Coyotes will then head out on a four-game roadie to begin December, starting on Tuesday evening against the Columbus Blue Jackets. These two teams met in Glendale back on Nov. 7, with CBJ coming away with a 3-2 regulation victory at Gila River Arena. The Coyotes will be looking to salvage a draw in the season series in this one, which will get started at 7:00 P.M. local time at Nationwide Arena (5:00 P.M. in Arizona).

Well, we’ve reached the “Thanksgiving cutoff” and the Coyotes are comfortably in a playoff spot.

With that, the club will be doing a lot more scoreboard watching this winter and spring than they have in a long time – here’s a look at how Arizona’s division rivals fared last week: