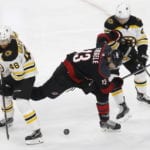 Oilers likely in a holding pattern for now

Kurt Leavins: Edmonton Oilers GM Ken Holland was on Bob Stauffer’s 630 CHED show yesterday. From what Holland was saying, it’s sounding like they intend to keep the same roster for the next couple of months and then possibly make a significant addition if they are still in a solid position.

Kreider not thinking about his contract situation

When asked, Kreider said he hasn’t thought about it at all.

“I don’t think about my contract status. Not at all. I’m serious.

Both the Rangers and Kreider’s camp haven’t said much about his future. He’ll be 29-years old when he signs his next contract.

Do the Bruins have a Krug replacement?

Though he’s not in the same caliber is Krug, it does give them something to think about since Krug is a pending UFA.

Krug’s camp and the Bruins had talked extension before the season, but there was no indication that they were close to a deal.

Could Grzelcyk continue to step up if the Bruins move on from Krug? Could the Bruins consider moving Krug in-season if they can get a big return for him?