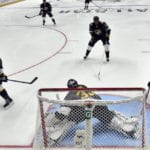 The Dallas Stars could look for a defenseman

Mike Heika of the NHL.com: (mailbag) Asked if sees the Dallas Stars trading one of their extra forwards … Don’t see that happening as they likely feel the extra depth will be needed. There will be injuries throughout the season and it doesn’t hurt to scratch someone here and there. believes they’d like to keep the forward group intact but add a high-level rental defenseman closer to the trade deadline.

Think that both pending UFAs Corey Perry and Anton Khudobin will wait out the season. There is lots of time to talk, but it makes sense to wait.

Could the Devils and Flames come together on a Taylor Hall trade?

Larry Brooks of the New York Post: With New Jersey Devils at the bottom of the standings, who does GM Ray Shero consider moving on from first, head coach John Hynes for pending unrestricted free agent winger Taylor Hall?

If the Calgary Flames knew they would be able to extend Hall, would they consider trading Johnny Gaudreau for Hall?

Would the Devils consider it or would they prefer a future type deal – first-round pick, prospect, etc.?

Kadri was “very close” to becoming a Flame

Chris Johnston of Sportsnet: Nazem Kadri said that he had been really close to waiving his no-trade clause for a trade to the Calgary Flames back in June. Kadri had been given permission by the Toronto Maple Leafs to speak both Brad Treliving and Bill Peters.

“It was actually very close,” said Kadri. “They put a good pitch together. I know a few guys, I train with a couple of those guys in the off-season. Even though they were on the no-trade list, it was very tempting from a hockey standpoint. Had a good team.”