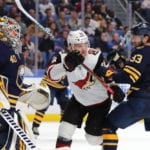 Sabres have some defensemen to move

Friedman says they are likely looking for some help up front.

Coyotes looking for a defenseman

Craig Morgan of The Athletic: A couple of sources have said that the Arizona Coyotes are looking at adding a No. five to seven defenseman that has a bit of grit and skill.

Niklas Hjalmarsson is still weeks away from returning. Jordan Oesterle has battled some injuries and hasn’t played like he did last season. Ilya Lyubushkin, Kyle Capobianco and Aaron Ness have been rotating in.

Untouchables to trade candidates for the Jets

Any moves may be more about salary cap space for now and into the future. There is the Nikolaj Ehlers for a defenseman trade speculation. The Jets only have five draft picks this year, and their prospect depth isn’t what it once was.

Candidates – Mathieu Perreault (M-NTC) – Could eventually be moved to free up cap space. Has one year left on his deal.

Dmitry Kulikov (M-NTC) – The pending UFA has a six-team no-trade list and a $4.33 million cap hit.

Sami Niku – Producing in the AHL and Beaulieu injury may give him an NHL opportunity.