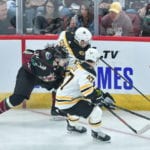 The Bruins also signed forward Chris Wagner to a three-year contract extension with a salary cap hit of $1.35 million.

NHL.com: Bruins GM Don Sweeney after signing Coyle six-year deal at $31.5 million and Wagner to a three-year deal at $4.05 million.

“We are a product of the depth of our club and Charlie and Chris, we’re really excited to have them for the foreseeable future,” Bruins general manager Don Sweeney said in Ottawa on Wednesday prior to the Bruins playing the Senators at Canadian Tire Centre (7 p.m. ET; TVAS, SN360, NESN, NHL.TV). “I think Charlie came in and fit in very nicely with our club last year and now you’re seeing the versatility with him as a player being able to to go up the lineup. .. and Chris brings elements that we really respect.”

Joe Haggerty of NBC Sports: Bruins forward Charlie Coyle is basically on the only player in their organization that could fill for either David Krejci or Patrice Bergeron if anything were to happen to them.

The 33-year old Krejci has a year left on his deal and Coyle could be their No. 2 center after that.

Coyle might have been able to get more than $5.25 million if he were to hit the open market in July.

The Bruins do any enough depth that they could move on from Krug after the season. The Bruins re-signed Charlie McAvoy and Brandon Carlo before they spoke with Krug, then moved on to Coyle and Wagner.