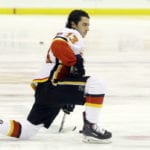 To say the Calgary Flames are off to a slow start to this season is an understatement.

After finishing atop the Western Conference with their best regular-season numbers (107 points) in 30 years, the Flames were expected to be a serious Stanley Cup contender in 2019-20. As of Nov 25, however, they were one point out of the final wild-card berth.

According to Sportsnet’s Eric Francis, some Flames fans wanted Gaudreau traded. He doubted Treliving would do something that rash during the season. Nevertheless, he suggested an off-season move was possible if the Flames missed the playoffs or once again eliminated from the opening round.

The Athletic’s Darren Haynes wondered if it was time for the Flames to consider such a move. While acknowledging the difficulty of swinging a major deal in-season, Haynes felt it was at least worth exploring.

Sam Carchidi of The Philadelphia Inquirer suggested the Flyers should be at the head of the line if Gaudreau is available, citing in part the winger’s South Jersey roots. If the Flames want a return providing more immediate help, Carchidi proposed offering either Jakub Voracek or James van Riemsdyk.

Meanwhile, the New York Post‘s Larry Brooks wondered if the Flames would swap Gaudreau for New Jersey Devils winger Taylor Hall if they could re-sign the latter to a contract extension.

At this point in the season, the most notable player in the NHL rumor mill is a washed-up Ilya Kovalchuk. The notion of a young star like Gaudreau on the trade block makes for entertaining headlines.

Have everyone floating the notion of a Gaudreau trade forgotten he’s coming off a career-best 99-point campaign? That he’s been the Flames leading scoring in every season since 2015-16? That he finished second in team scoring during his rookie campaign in 2014-15? That, apart from an injury-shortened 2016-17, his production steadily increased?

Gaudreau has struggled at times this season, but he’s not the only one having trouble scoring. Linemate Sean Monahan and team captain Mark Giordano have also seen a decline in their production. Ditto Mikael Backlund and Michael Frolik. Meanwhile, the offensive contributions of off-season acquisitions Milan Lucic and Tobias Rieder have been negligible.

Assuming Treliving was thinking about moving Gaudreau, what could he possibly hope to gain in return?

If he’s looking to rebuild, he’ll get a package with a couple of draft picks, one or two prospects, and perhaps a young NHL-ready player.  But that’s not the game plan here, not with a team that was the top club in the West last season.

Treliving won’t get equal value for Gaudreau if he seeks immediate help. Carchidi’s suggestion of Voracek or van Riemsdyk sends the Flames a thirty-something winger whose best seasons are behind him.

As for Brooks’s suggestion of Hall, Gaudreau has put up more points (407) since 2014-15 than the frequently injured Hall (306) over the same period. Re-signing Hall would likely cost the Flames well over $10 million annually, assuming the pending free agent is receptive to staying in Calgary beyond this season.

Gaudreau deserves his fair share of criticism, but we don’t know the full story behind his offensive struggles. Perhaps he’s nursing an undisclosed injury or dealing with a personal matter. Maybe he and his teammates are having trouble adjusting to better-prepared opposition this season. Perhaps head coach Bill Peters isn’t doing a good enough job juggling his lineup to address that issue.

It’s understandable why Flames followers are upset over the club’s poor play this season. But unless Gaudreau’s become a dressing-room cancer who wants out of Calgary, trading him will only make things worse.