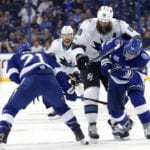 Bergevin has also been spotted watching the Blackhawks farm team in Rockford a few times this season as well.

Kevin Kurz of The Athletic: (mailbag) Don’t think that Pete DeBoer was ever on the hot seat when the San Jose Sharks were struggling. DeBoer’s multi-year contract extension had just kicked in this season.

The Sharks top trade priority right now should be to find a scoring winger or two. One for the right side would be nice. That should be their priority over finding a goaltender. The Sharks don’t have a first-round pick this year and not a lot of assets to offer up.

Pending UFA goaltenders that might come available and that might interest the Sharks could include Corey Crawford, Robin Lehner, Jimmy Howard, Craig Anderson, Brian Elliott and Ryan Miller.

Guessing that this will be Joe Thornton‘s last season. It’s been a tough year for him so far. He did get off to a slow start last year as well though.

Yes, the Lightning has some smaller forwards but the team was built that way, choosing skill and skating over size. They will have some salary cap concerns next year and don’t expect big changes to happen during the season. Smallish players like Tyler Johnson, Ondrej Palat, and Yanni Gourde all have no-trade clauses.

What the Lightning do at the trade deadline will depend on what their needs are in late February and what is available. They won’t be getting much cap freedom this offseason, so any in-season move could be a rental or involve salary going out as well.