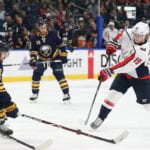 Kings and Toffoli not talking

Dennis Bernstein: From knowledge there have been no contract extensions talks between the Los Angeles Kings and pending UFA Tyler Toffoli.

Sabres talking to Flames and Penguins?

WGR 550: Elliotte Friedman on WGR 550 on the Buffalo Sabres: “I don’t think much has changed on the trade fronts. I think the #Sabres are still talking to Calgary, there’s been some rumblings that they’ve talked to Pittsburgh. But it’s the usual suspects that are available. Talks continue to look for a forward.”

WGR 550: Friedman continues on the Sabres: “I think the #Sabres want to make an impact trade. They had a good start, a positive feeling, and now that’s being challenged and they want to reinforce the team. The problem is right now is so many teams are so close to the salary cap.”

Chris Johnston of Sportsnet: Elliotte Friedman reported on the weekend that the Washington Capitals are talking contract extension with forward Nicklas Backstrom – not with an agent.

Agents normally charge around a three percent fee. Drew Doughty negotiating his own eight-year, $88 million deal saved him over $2 million.

Samantha Pell: Capitals GM Brian MacLellan confirms that they are talking to Backstrom about a contract extension. There is no imminent update.

“We want him back. He is a big part of our organization and we are going to do whatever we can to get him back.”

J.J. Regan of NBC Sports Washington: (mailbag) It’s still too early to move on from Richard Panik. He is in the first year of a four-year deal and teams won’t in a rush to add that. It’s doubtful that if they were to find someone who wanted his contract, that they would get another third-line player who can produce in return. If they were to move and gain some cap, they don’t have really have anyone that could fill the role better.

Paying Nick Jensen $2.5 million to be on the pairing isn’t outrageous. He is right-handed, on a reasonable deal, and can fit in a top-four, but it just may not be the Capitals top four.