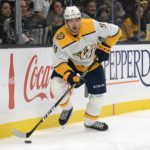 Adam Vingan of The Athletic (Mailbag):  Again, it is getting more and more apparent that Peter Laviolette is wearing out his welcome in Nashville quickly.

The first question focuses on line changes. Do coaches tend to shift lines more when things are not going well? That answer is yes in Nashville as the Nick Bonino line is the only one that has remained the same. Every other line has been blended at least several times over the past seven games.

Laviolette pivoted back to the JOFA line but the reality is that the Filip Forsberg–Matt Duchene duo has worked best. The last month or so has seen some of the most questionable line shifts which lead to is Laviolette’s job safe?

Other things include Viktor Arvidsson being a hair more picky with his shots but his rushes per 60 are what is down. This last sentence appears to be a theme with Nashville and is something to keep an eye on. Nashville is not itself and the regression is real. Something has to give.

Arizona Coyotes still have some questions

Craig Morgan of The Athletic (mailbag):  Arizona has won four of their last six games and is in a primed position to contend for a playoff spot again. The first question is what to make of Conor Garland. Garland plays the game with an edge and right up to his potential. That makes him likable and why he will make some money in his next deal.

The bigger question is what would Arizona want to add closer to the deadline. That answer lies in a veteran defenseman to help with the core. This all depends on if Arizona is still contending for a playoff spot. Meanwhile, they await the return of Niklas Hjalmarsson.

Pierre LeBrun of The Athletic:  The Seattle expansion process has been further spelled out and it makes clear that Vegas cannot “park players”. Vegas will be exempt from having to protect players. Seattle enjoys the same parameters as Vegas in the process. Seattle will be able to make moves starting in March 2021 but do not expect the same overthinking.