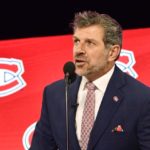 Can the Montreal Canadiens truly contend?

A video podcast from The Hockey News:  This question posed is a great one because of what Montreal is and is not. They are one of the best 5-on-5 teams in hockey and yet one of the worst on special teams. It is baffling in so many ways. Their identity needs to be explored before contemplating trades.

Does Montreal ultimately stand pat? The dilemma is does one mortgage to acquire talent? The answer appears to be no. Could there be smaller moves? That is more plausible. Consider the Canadiens because of the wealth of prospects from center (Nick Suzuki) to goaltender Cayden Primeau.

By next season, Cole Caufield enters the mix and there is a 30-plus goal a year sniper that can electrify a lineup and a power play that lacks punch now. Tweaking Montreal’s bottom-six is probably the most likely need for the Canadiens. Contending this year may be a pipe dream but the not too distant future is plausible.

Brendan Kelly of the Montreal Gazette:  With Mike Babcock getting the boot in Toronto, the inevitable question had to be asked. Would Babcock be a fit in Montreal at some juncture? Now, Claude Julien is on the hot seat and especially if the Montreal Canadiens miss the playoffs again.

Also, sometimes a team sees an upgrade and goes for it. Babcock could help but he might also stifle development in some ways. However, with the way he was dismissed in Toronto, would he turn a new leaf at this point?

It is difficult to determine whether Babcock was the real reason why Toronto failed so much this season. At the same time, hiring him to coach the Montreal Canadiens might not help the Canadiens either.

The problem is that so far Botterill has done well drafting but the NHL has been messy. Does a trade need to be made? Would it work out? Those are questions that concern. Can Botterill be trusted to make those acquisitions? If this downturn continues, that answer may be found out sooner rather than later.