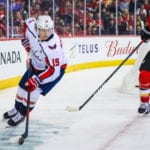 No major changes coming for the Flames

Eric Francis of Sportsnet: Calgary Flames GM Brad Treliving takes the blame for their recent struggles, saying it starts with the manager and that he has been “horse**t”

Treliving has been asked about potential changes over the past few days.

Johnny Gaudreau isn’t going to be traded in option.

“I’m told Ron that he has begun talks with the Capitals without an agent,” said Sportsnet’s Elliotte Friedman during the Headlines segment on Hockey Night in Canada. “I would think that would probably be a good sign for the player and the team that they feel they can get something done together.”

“Johnston: Doug Armstrong is here of the St. Lous Blues and he is also here with his VP of Hockey Operations, Dave Taylor. Whenever you see two senior executives from one team, it raises the eyebrows.

This is the second time Armstrong has watched the Leafs this season. They’ve had a number of senior staffers around Toronto games this year. That is something to watch as we get closer to the trade season.