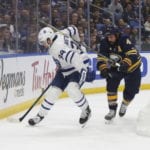 TSN: Buffalo Sabres GM Jason Botterill said earlier this week that he is “actively looking” for a forward but the trade market is difficult right now.

“It’s a moving target,” Dreger said on Insider Trading Thursday. “Jason Botterill, the general manager of the Buffalo Sabres, has, in fact, made offers on forwards but the system is gummed up a little bit – the financial system of the National Hockey League. There are so many teams, 10-plus teams, who are working with LTIR players and that can get very, very problematic.

“There are some out there that believe that Botterill is feeling a sense of urgency and he’d like to make at least one, maybe even two, trades in the next week to two weeks. But he’s got to find the right fit and the right match.”

There are currently 11 teams that are using LTIR.

The Leafs still owe Babcock a lot of money, what if another team wants him?

TSN: The Toronto Maple Leafs owe Mike Babcock $5.875 million per year for the next three seasons according to Pierre LeBrun. Now, what if another team comes calling for Babcock?

“Well, first of all, if you’re another NHL team, approaching the Leafs about interviewing Mike Babcock for their head coaching position, it’s going to be interesting to a lot of people around the league that I’m talking to, what number MLSE has in mind that they will let Babcock go. We know about the offsetting rules and you pay a coach and your old team pays the rest. Well, what if the Leafs say “you have to pick up the entire contract?” That’s within their rights in terms of releasing Mike Babcock to coach another team.”

LeBrun adds that Babcock plans on talking some time away to decompress, but will eventually start to miss it.

A team that will likely want to talk to him eventually is Seattle. They plan on hiring a coach between January and June of 2021.